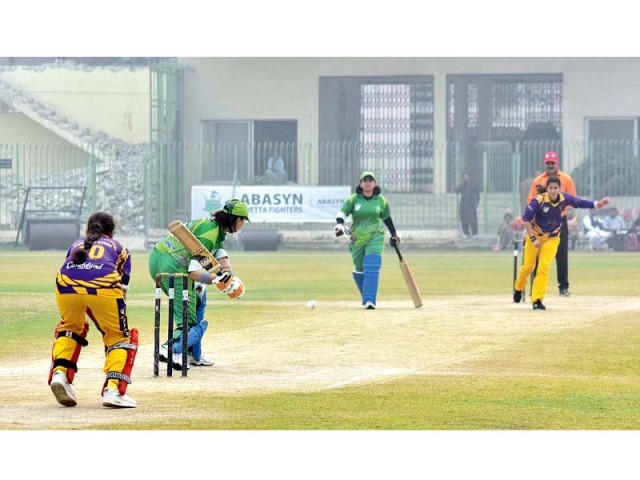 PESHAWAR: Rawalpindi Angels trounced Quetta Fighters by seven wickets and got berth in the semi-finals as the fourth team in the on-going First Women Twenty20 Cricket Super League being played here at Arbab Niaz Cricket Stadium on Saturday.

Rawalpindi and Islamabad Blasters were tied at the point tally 5-5 but on better run rate Rawalpindi Engels, who chased the 97 runs in just 10 overs and won the match by seven wickets, took berth into semi-finals.

FATA Strikers, Quetta Fighters and Rawalpindi Hitters are the three other teams qualified for the semi-finals.

Opener Rida struck 19 runs with two boundaries, Dilawaiz made another vital 18 runs, Aysha scored 14 runs, none of the other batters could cross the double figures and thus Kashmir Stars made a meagre runs total of 53 runs.

In reply, Kiran along with her excellent bowling scored a vital 23 runs, Sana scored 16 runs and Jehazeba scored 10 runs. Thus Islamabad Blasters chased the target for the loss of nine wickets after playing 19.2 overs. Kiran was declared as player of the Match.

In the second match Rawalpindi Angels defeated Quetta Fighters by seven wickets before chasing a 98 runs target in 10 overs and moved to the semi-finals on better run rate against Islamabad Blasters as both were tied 5-5 points each with two wins and a draw match due to heavy down pour.

In reply, Rawalpindi Angels chased the target in just 10 overs for the loss of three wickets with some handsome batting by opener Benish who struck an unbeaten 65 runs including eight boundaries and two sixes, Nada Khan made 29 runs with five boundaries and Hamna scored 19 runs not out including two boundaries.

Aysha got two wickets for 31 runs in her 3.2 overs spell Aman got one wicket for 35 runs in her four overs spell. With this vital victory Rawalpindi Angels moved to the semi-finals on better run rate. Benish was declared as player of the Match.