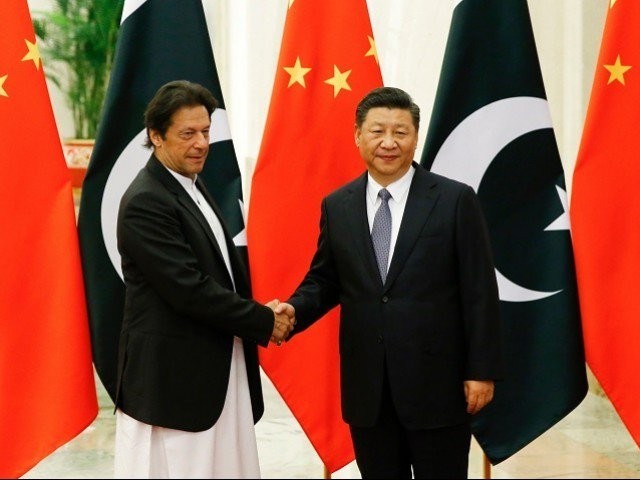 Pakistan is perhaps thinking of getting a bailout package of at least $5 billion from China. PHOTO: AFP

Prime Minister Imran Khan is in China on a five-day visit. The prime objective of the PM’s visit is to seek a generous bailout package from China so as to be able to negotiate a relatively less demanding IMF deal.

On its part the top Chinese leadership is expected to use the opportunity to try to remove all the legitimate as well as the not-so-legitimate doubts that the new PTI-led coalition government has been expressing since its advent about the China-Pakistan Economic Corridor (CPEC).

Pakistan is perhaps thinking of getting a bailout package of at least $5 billion from China. But it would entirely depend on Beijing how this package is put together, if at all.

The PM is also likely to take up the issue of steep trade imbalance in favour of China with Beijing exporting goods worth $11.458bn to Pakistan while exports to China from Pakistan have remained stuck below $2 billion for some years. This imbalance needs to be corrected on an urgent basis.

Meanwhile, Pakistan’s textile industry has expressed the hope that Prime Minister Imran Khan would be able to persuade the Chinese leadership to set up a special credit line of $5 billion for fresh investments and joint ventures between the manufacturers of the two countries.

This facility, our textile tycoons believe, could be extended by China under pay-as-you-earn scheme on buying-back basis to encourage both investment in and exports from Pakistan.

This special credit line is also expected to help early relocation of the Chinese textile industry to Pakistan and increase our exports there. There is said to be a big market for Pakistani textile products in China where wet textile processing is being shut down and relocated to other countries.

China’s domestic textiles and clothing market is estimated to be $500bn. Pakistani textile exports form only three per cent of their textile and clothing imports of $268bn, showing that Pakistan has a huge potential there.

It is also being proposed that China could consider setting up garmenting plants in Pakistan for export to avert Trump tariffs on its American shipments and avail Pakistan’s market access as well to the EU under the GSP+ scheme.

Another country which is located south of another part of China — Vietnam — has grown by leaps and bounds taking advantage of skyrocketing growth in its northern neighbour.

According to Bennett Murray, an American journalist serving the German news agency DPA in Hanoi writes in his article ‘Vietnam Is Winning the US-China Trade War’ published in Foreign Policy on Oct 30, 2018 with Asian business people increasingly resigned to a protracted trade war between Washington and Beijing, firms are more eager than ever to escape tariffs by relocating to China’s smaller southern neighbour.

“Most telling was the decision of Goertek, the Chinese company assembling Apple’s AirPods, to reroute all production of the earbuds to Vietnam.

“The advantages of production in Vietnam over its northern neighbour were mounting even before US President Donald Trump took office. In Shenzhen, China, the home of the Apple supplier Foxconn’s flagship Longhua industrial complex, the monthly minimum wage is now 2,200 yuan ($315). In contrast, Vietnam’s highest minimum wage (the national government sets a multitier minimum wage based on regional living costs) is almost half that at 3.98 million Vietnamese dong ($170). Wages fall even lower away from major cities—in Thai Nguyen’s Pho Yen district, the home of the Samsung factory, the minimum wage is a mere 3.09 million dong ($130).

“China and Vietnam also have their own free trade agreement, allowing firms in Vietnam to cheaply import raw materials from the north for manufacture and export.”

Pakistan can also emulate Vietnam, but before we try to take that route our manufacturers and exporters need to do a thorough market survey of western China in order to be able to identify manufacturing units there which would benefit by getting relocated in Pakistan. Also the survey would tell us what kind of products and of what quality are in demand in the region.