KARACHI: Pakistani currency faced a hefty depreciation of Rs25.096 against the SDR – a basket of world’s five major currencies – compared to Rs16.643 to the US dollar in fiscal year 2017-18.

The value of the SDR is based on the basket of five currencies – US dollar, euro, Chinese renminbi, Japanese yen and British pound.

The impact of the huge depreciation against the SDR massively impacted Pakistan’s finances as most of its financial liabilities – like debt repayment – are in SDR form. Simultaneously, the rupee-SDR exchange losses badly hit the State Bank of Pakistan’s (SBP) consolidated profit in fiscal year 2018.

The International Monetary Fund (IMF) maintains supplementary foreign currency reserves of its respective member countries in SDR. The reserves assist the IMF in bailing out its member countries when they need financial support.

The central bank profit dropped 26% to Rs175.67 billion in FY18 mainly due to the exchange losses following rupee depreciation compared to Rs238.06 billion in the preceding year. 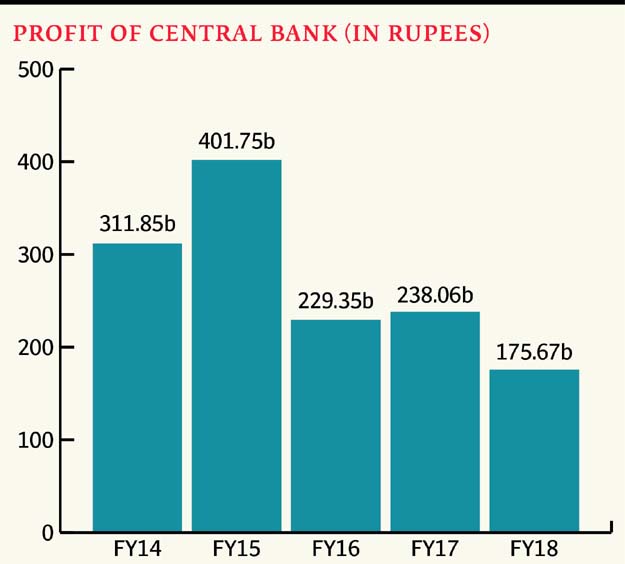 It recorded a massive Rs72.28-billion loss due to the rupee depreciation against the SDR compared to a gain of Rs24.56 billion in FY17.

Accordingly, the rupee “depreciation against the SDR resulted in an exchange loss of Rs124.30 billion”, the SBP said in its Annual Performance Review for FY18.

Accordingly, the movement in the rupee-SDR and rupee-dollar exchange rates directly affects the exchange account, the report added. But thanks to the government’s heavy borrowing, because interest income on this front helped shore up net earnings in the year under review, it added.

“Borrowings by the government from the SBP during FY18 remained the major sources of income for the bank during the year,” the report said.

The increase is further augmented due to increase in export-related loans to banks and financial institutions. Liabilities of the bank stood at Rs7.19 trillion as on June 30, 2018 compared to Rs6.32 trillion on June 30, 2017.

“This rise (of Rs873 billion) was led by the increase in currency in circulation, bank deposits, payable under bilateral currency swap agreement and payable to the IMF,” it underlined. “This increase was, however, partly offset by the decrease in government balances.”