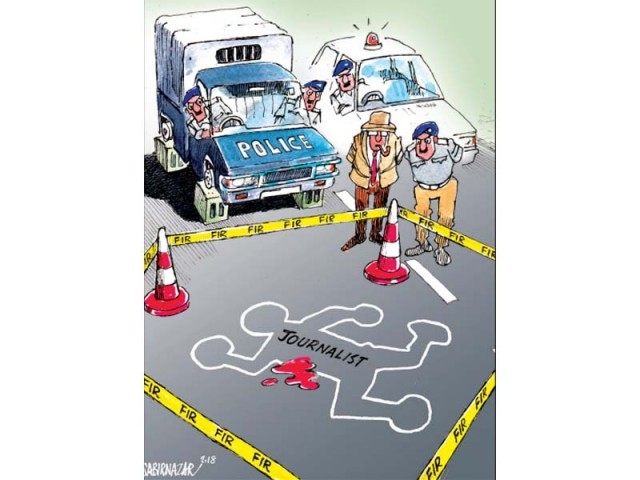 KARACHI: Sohail Khan was a young print and broadcast journalist in the scenic city of Haripur in Khyber-Pakhtunkhwa. He had done several stories on narcotics for the local daily K2 Times and its partner TV channel that he worked for. His stories had made him a marked man. The local drug peddlers had threatened him on several occasions already.

On October 16, he finally decided to submit a written complaint with the police. But it was a little too late. On his way back, he was shot dead near his house.

The hue and cry raised by the journalist fraternity combined with the police report compelled authorities to take action. They have arrested local drug addict. But will it lead to conviction?

According to the Islamabad-based Freedom Network, the chances are 1/16 if the case goes to trial.

This is despite an improvement in Pakistan’s ranking in the Committee to Protect Journalists’ Impunity Index. Pakistan is now the ninth-worst country in the world for journalists as opposed to the seventh-worst in 2017. It has been leapfrogged by Afghanistan, which went through a blood-soaked election, and Colombia, the home to narco-wars.

These are the countries where journalists get killed and the killers go free, according to CPJ’s 2018 #ImpunityIndex:

Therefore, it is not much of an improvement and Pakistan remains a country where journalists risk injury, death, kidnapping or detention in their efforts to hold those in power or authority to account.

According to Freedom Network’s report, at least 26 journalists have been killed for their work during the last five years. However, only 16 of these cases went to court for trial of which prosecution was concluded in six cases and conviction handed in just one case.

According to @pressfreedompk of 26 journalists murdered in Pak during last 5 years for their work, the cases of 16 journalists went to court of which prosecution & trial was concluded in 6 cases & conviction handed in 1 case @khattak63 @adnanrehmat1 #NoImpunity #JournoSafe pic.twitter.com/Z1yvHxnHii

“…the murdered journalists and their families have received justice in only one of the 26 cases… but the accused was able to get the sentence overturned at the high court level.”

The research study, which has tracked and examined cases of journalists killed in Pakistan between May 2013 and May 2018, was released on the eve of the UN’s International Day to End Impunity for Crimes against Journalists.

“Journalists continue to get target-killed … and the state’s legal system has failed to provide them justice,” says Iqbal Khattak, the Executive Director of Freedom Network, in a press statement.

While the report stated most of the killers remained unidentified, in 60% of the cases police failed to even complete the investigation which generates a full report to submit before a court for trial.

According to Mazhar Abbas, a journalist with almost four decades of experience and multiple accolades, the situation of press freedom has gone from bad to worse.

Journalists in Asia remain under threat

The Freedom Network report makes similar observations based on the data available to them.

“The performance of police in investigation of murder of journalists and producing a final challan is the worst in K-P where only one in six cases reached this stage,” the report stated. “In Punjab the police failed to produce a final challan in one-third of the cases, whereas in Balochistan and Sindh one in every five cases.”

Being in a major city is no guarantee of safety either. Wall Street Journal’s Daniel Pearl was abducted from Karachi. Geo TV’s Wali Babar was shot dead in the same city. Asia Times Online’s Saleem Shehzad went missing from the federal capital with his body later found dumped in a nearby town. Hamid Mir survived a hail of bullets in Karachi.

“One of the reasons that impunity will not end is that authorities are not keen on it. They have failed to release the reports of judicial commission in several cases. Most importantly of Hayatullah Khan, whose widow was also murdered,” says Mubashir Zaidi, who hosts a current affairs show known for not pulling any punches.

For Abbas, a concentrated and holistic effort is needed to address the situation.

“We have repeatedly asked the government to appoint a special prosecutor so that cases of murdered journalists can be fast-tracked. But it is yet to happen.”

Others take a more pessimistic view of the situation. When asked what could be done to address the issue of impunity, noted journalist and author Mohammed Hanif eloquently replied: “I wish I had an answer.”