Khashoggi killed by 'strangulation' and 'cut into pieces' after murder: Turkish prosecutor

Khashoggi killed by 'strangulation' and 'cut into pieces' after murder: Turkish prosecutor

Saudi journa­list was 'strang­led' and his body was then 'cut into pieces' under a 'premed­itated plan'
By AFP
Published: October 31, 2018
Tweet Email 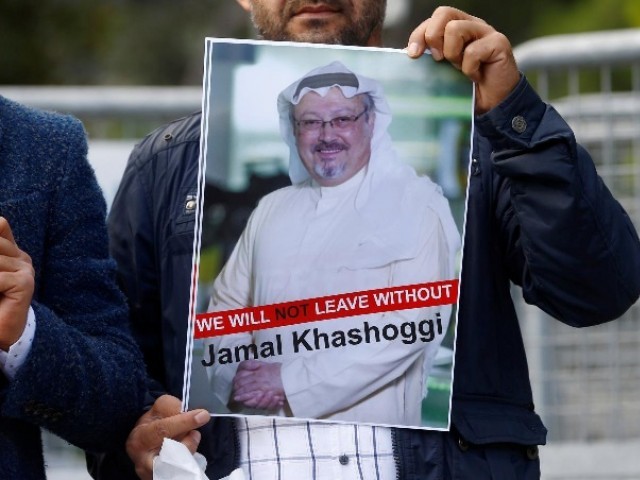 A demonstrator holds picture of Saudi journalist Jamal Khashoggi during a protest in front of Saudi Arabia's consulate in Istanbul, Turkey. PHOTO REUTERS

ISTANBUL: Journalist Jamal Khashoggi was strangled as soon as he entered the Saudi consulate in Istanbul and then “cut into pieces”, Turkey’s chief prosecutor said Wednesday, making details of the murder public for the first time.

A statement from the office of prosecutor Irfan Fidan said meetings with his Saudi Arabian counterpart, who visited Istanbul this week, had produced “no concrete results” on the killing, which it said was premeditated.

Khashoggi, a 59-year-old Washington Post contributor, was murdered after entering the Saudi consulate in Istanbul on October 2 to obtain paperwork ahead of his upcoming wedding. His body has not been found.

The statement comes hours after Saudi Arabia’s chief public prosecutor ended his visit to Istanbul, during which he met Fidan twice and visited the kingdom’s consulate and the regional offices of the Turkish intelligence agency.

“In accordance with plans made in advance, the victim, Jamal Khashoggi, was strangled to death immediately after entering the consulate on October 2,” the Istanbul prosecutor’s office said in a statement.

Saudi prosecutor at Istanbul consulate where Khashoggi was killed

“The victim’s body was dismembered and destroyed following his death by suffocation – again, in line with advance plans,” it added.

Turkish authorities said they were not satisfied after the talks with the Saudi prosecutor.

“Despite our well-intentioned efforts to reveal the truth, no concrete results have come out of those meetings,” the Istanbul prosecutor’s office said.

President Recep Tayyip Erdogan has repeatedly urged Riyadh to reveal the location of the body and who ordered the hit.

And contrary to media reports, Mojeb also said no statement was made by the Saudi authorities that the body was given to a “local co-operator,” according to the Istanbul prosecutor’s office.