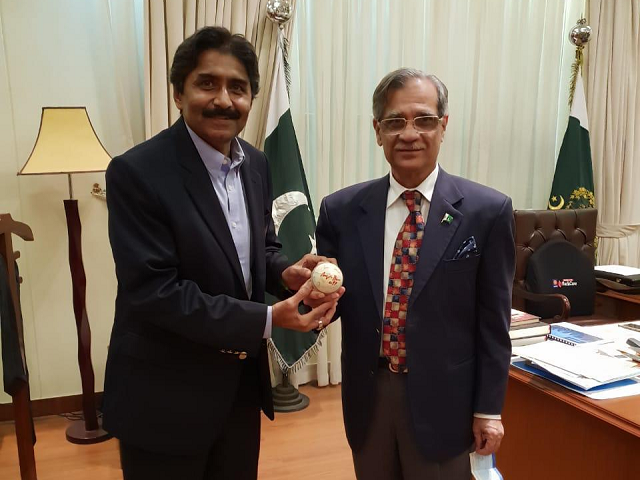 Miandad met Justice Nisar at the Supreme Court Karachi Registry on Saturday, where he offered the sports memorabilia to the top judge for the Diamer-Bhasha and Mohmand dam fund. PHOTO: EXPRESS

ISLAMABAD: Legendary batsman Javed Miandad has presented the match ball of 1992 World Cup final to Chief Justice of Pakistan Mian Saqib Nisar as a donation to his dams fund.

The former cricketer met Justice Nisar at the Supreme Court’s  Karachi Registry on Saturday, where he offered the sports memorabilia to the top judge for the construction of Diamer-Bhasha and Mohmand dams.

The match ball was gifted to the former cricketer by the world cup final’s umpire, Brian Aldrich.

The ball bares the signatures of Prime Minister Imran Khan, Justice Nisar and Miandad himself.

Moreover, the former cricketer also presented a cheque of Rs200,000 for the fund as well.

Chief Justice Nisar had kick-started the initiative by donating Rs1 million for the two dams and urged all institutions and individuals to play their due role for the construction of the dams in the country.

The country’s Supreme Court had directed authorities to immediately start construction of the two dams and appealed to the people, including overseas Pakistanis, to make a contribution for executing the projects.

In a brief pre-recorded address to the nation, Prime Minister Imran described the ongoing water crisis as the biggest challenge confronting the country. He warned that if new water reservoirs were not built within seven years, the country would be facing a drought-like situation.