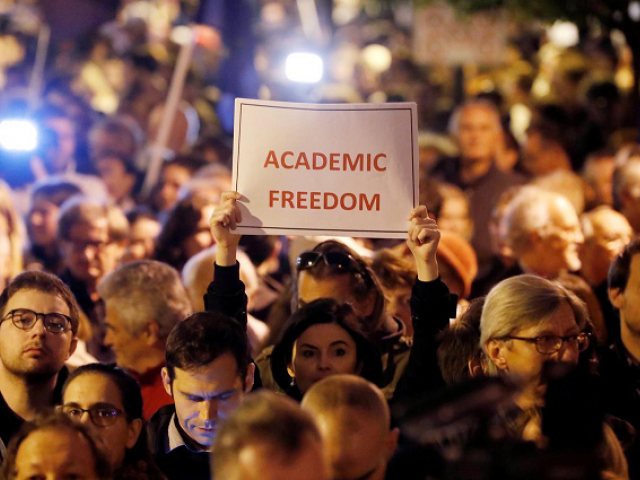 People attend a rally outside George Soros's Central European University to protest against the university being forced out of Budapest by Prime Minister Viktor Orban's government in Budapest, Hungary, October 26, 2018. PPHOTO: REUTERS

BUDAPEST: Thousands rallied in Budapest on Friday on behalf of a university founded by US financier George Soros which says it is being forced out of Hungary by the nationalist government of Prime Minister Viktor Orban.

Orban, who believes that European culture is under threat from migration and multiculturalism, has for years vilified the liberal Soros, who was born in Hungary and backs a number of causes there.

The US-registered Central European University (CEU) founded by Soros in 1993 said on Thursday that it would switch to enrolling new students in Vienna if it did not get guarantees of academic freedom by Dec 1.

Last year, in a move seen by many as aimed specifically against the CEU and Soros, Orban’s government changed Hungary’s education law so as to withdraw the right to operate from foreign-registered universities which did not also offer courses in their home country.

One participant of the rally organized by opposition party Momentum, which has no seats in parliament, said the CEU represented freedom of thought and European values.

“(For the government) it is really a problem, because thoughts are expressed here which criticize the government,” said Peter Simor, a 36-year-old sleep scientist at another Budapest university.

The ruling nationalist Fidesz party said in a statement that Momentum was linked to the “Soros network” and described the outcry over the CEU as ‘hysteria’ and its Dec 1 ultimatum as political bluff.

The dispute has worsened a rift between Orban’s government and European Commission.

In an interview published in Czech, Hungarian, Polish and Slovak media, French President Emmanuel Macron told eastern EU members on Friday not to fall out of step with the bloc’s principles, singling out Hungary and Poland whose nationalist governments have clashed with Brussels over rule-of-law issues.

Palestinian agree ceasefire after exchange of fire with Israel