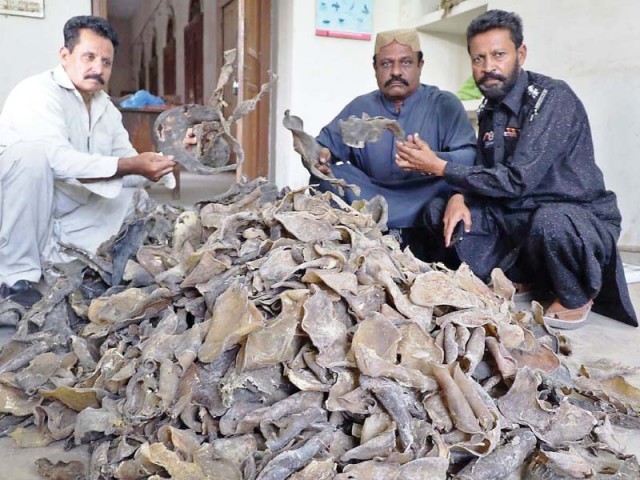 Wildlife department officials conducted a raid at a shop in Karachi and seized 150 kilogrammes of dried body parts and meat of freshwater turtles as well as 200kg of pangolin scales. PHOTO: ONLINE

KARACHI: The Wildlife Department on Friday conducted a raid in Karachi and seized 150 kilogrammes of dried body parts and meat of freshwater turtles. Apart from this, the officials also found around 200kg of scales of pangolin from a shop. The raid was jointly conducted by vigilance teams of Thatta, Sujjawal and Karachi.

“On a tip off, we conducted a raid on a shop located in the car parking area of Khadda Market and recovered these precious things,” said Taj Mohammad Shaikh, Conservator at Wildlife Department. “Someone informed us that the dried meat and body parts of turtles were being smuggled to China. The timely action has foiled this effort,” he added. He said that no culprit had been arrested yet, but a case had been registered under the Wildlife Act 2001. Briefing the media about the value of confiscated items, he said, “Total value of these items in the international market is estimated at US$90,000.”

He added that the pangolin scales retail in the international market at $300 per kg while the dried turtle body parts and meat retails at $200. “It looks like the shop owner was running this business for the past many years. We have started an investigation and will conduct more raids to arrest the people involved in it,” said Shaikh.