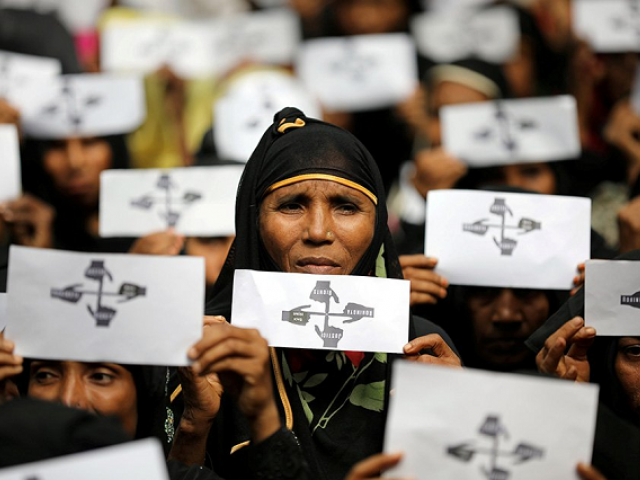 Rohingya refugee women hold placards as they take part in a protest at the Kutupalong refugee camp to mark the first anniversary of their exodus in Cox's Bazar, Bangladesh, August 25, 2018. PHOTO: REUTERS

UNITED NATIONS, UNITED STATES: Genocide against Myanmar’s Rohingya Muslims is still continuing, UN investigators said Wednesday as they presented a report to the Security Council, calling for the issue to be referred to an international tribunal.

Marzuki Darusman, chairman of the UN Fact-Finding Mission on Myanmar, said that beyond mass killings, the conflict included the ostracisation of the population, prevention of births, and widespread displacement in camps.

“It is an ongoing genocide,” he told a press conference.

“We consider the genocide intent can be reasonably inferred,” he said as he presented the team’s report to a United Nations Security Council meeting.

The 444-page report, first made public last month, called on the council to refer the issue to the International Criminal Court in The Hague, or to create an ad hoc tribunal, as was done with the former Yugoslavia.

The explosive report said that Myanmar’s top generals, including Commander-in-Chief Min Aung Hlaing, must be investigated and prosecuted for genocide in Rakhine state.

Myanmar has rejected accusations that its military committed atrocities in the crackdown last year that forced 720,000 Rohingya to flee over the border to Bangladesh.

The conflict has also seen about 390 villages destroyed and 10,000 Rohingya killed, Darusman said.

“The conditions are not in place for a safe, dignified and sustainable return of the Rohingyas in Bangladesh” to Myanmar, he warned, adding any attempt would just risk more deaths.

At the end of an October 10-20 visit to the country, the UN’s Special Envoy to Myanmar, Christine Schraner Burgener, said that accountability and “inclusive dialogue” were the two important pillars for national reconciliation.

“Credible fact-finding is the first step towards accountability,” she said.

The Myanmar government rejected the UN mission’s findings, questioning its independence and pointing out that it had itself established an independent investigative commission made up of Asian diplomats.

Darusman said however that Myanmar’s internal inquiries have “proven to be ineffective failures” so far.

The Security Council meeting was called by Western powers but opposed by China and Russia, allies who have friendly ties with Myanmar’s military and have regularly shielded the nation from criticism.

Myanmar maintains that the violence in Rakhine was triggered by Rohingya extremists who attacked border posts in August 2017.

The military has denied almost all accusations of genocide levelled against it, insisting that “clearance operations” were necessary to fight Rohingya militants.

But the UN fact-finding mission said there were reasonable grounds to believe that the atrocities were committed with the intention of destroying the Rohingya.

It found that the military’s tactics had been “consistently and grossly disproportionate to actual security threats”, and that an estimate that some 10,000 people were killed in the crackdown was likely a conservative figure.

Myanmar’s de facto leader Suu Kyi – once lionised by the international community as a democracy icon – has seen a sharp fall from grace following her refusal to speak out against the military.

The UN mission has pointed out that her government’s attempts to whitewash facts had worsened the situation for the embattled Rohingya.