His lead seems insurm­ountab­le over his leftis­t rival Fernan­do Haddad ahead of the Octobe­r 28 run-off
By AFP
Published: October 21, 2018
Tweet Email 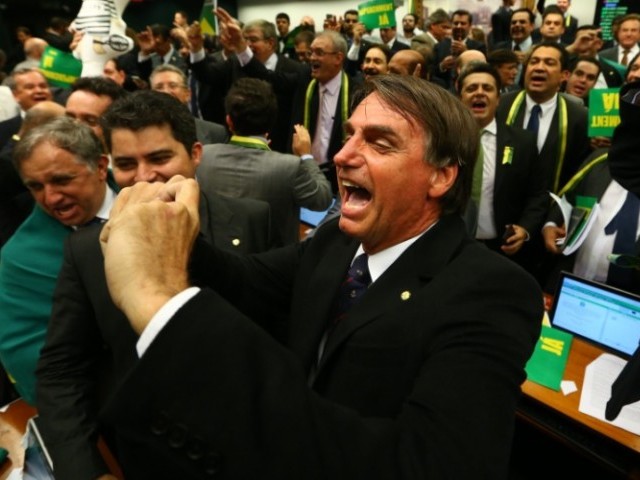 His lead seems insurmountable over his leftist rival Fernando Haddad ahead of the October 28 run-off, with most voters swayed by his anti-corruption promises–while a minority fears his authoritarian bent and intolerant views.

In the first round two weeks ago, Bolsonaro handily beat a dozen other candidates, garnering 46% of the vote. Polls since then suggest his support has climbed to 59%, against 41% for Haddad.

Much of his appeal lies in his image as a ‘clean’ political outsider who wants to crack down on rampant crime and stamp out graft in Latin America’s biggest, most populous nation.

His virulent attacks on Haddad’s Workers Party–widely seen as a corrupt outfit under now-jailed former president Luiz Inacio Lula da Silva, and the cause of Brazil’s worst-ever recession–have worked to his advantage. So has the endorsement of many of Brazil’s increasingly influential evangelical churches.

But opposition to Bolsonaro, while smaller, is fierce and won’t go away.

His record of contentious comments–praising Brazil’s brutal 1964-1985 military dictatorship during which he served as an army captain, calling a female lawmaker “not worth raping,” justifying torture, and denigrating gay and black people–have repelled a significant portion of the population.

Demonstrations in Brazil over the weekend both for and against Bolsonaro highlighted the deep polarisation.

Bolsonaro’s profile got a boost when he was stabbed last month by a lone assailant while campaigning for the first round.

During weeks of convalescence he intensified his already deft use of social media to speak directly to his millions of followers, largely ducking interviews with journalists.

That, and his controversial, tough-guy way of talking have added to comparisons many have made with US President Donald Trump.

The use of WhatsApp in particular has become a controversial issue in Brazil, after a report that $3-million contracts had been made with several companies to bulk-message voters with attacks on the Workers Party.

The app is wildly popular in Brazil, used by more than half of the population of 210 million.

Haddad, already frustrated by Bolsonaro’s refusal to engage him in scheduled televised debates, accused his rival of being behind the ‘illegal’ disinformation campaign, which he said needed to be investigated by electoral authorities.

Bolsonaro, speaking via Facebook video, denied involvement but said he wasn’t responsible for what his supporters did.

WhatsApp–owned by Facebook, which is already under scrutiny for allowing posts meddling with the 2016 US election and the Brexit referendum in Britain–subsequently closed tens of thousands of accounts, including one used by one of Bolsonaro’s politician sons.

Investors, however, are behind Bolsonaro as president, boosting the Sao Paulo stock market and the Brazilian real on the prospect of him triumphing.

Regardless of the social changes he might bring in, they see him as the better bet to shake up Brazil’s protectionist, sluggish economy.

Much of that stems from Bolsonaro’s advisor and pick to be his economy “super-minister” in the event of victory: Paulo Guedes, a respected, US-educated liberal economist who has spoken of privatizing Brazilian state-run companies and trimming spending to help pay down the country’s big public debt, and addressing the country’s over-generous pension system.

Yet Bolsonaro in recent days has dampened some of those expectations, saying the core businesses of oil group Petrobras and electricity enterprise Eletrobras would stay in government hands, and accusing China of “buying Brazil.”

Bolsonaro, “seems to be dithering on pension reform and privatization,” a British consultancy, Capital Economics, said in a briefing note. Also, “there are signs that Bolsonaro’s previous embrace of fiscal tightening and reform to Brazil’s welfare system is slipping.”

Analysts say Bolsonaro is benefiting from a public disgust with mainstream candidates in Brazil, who are all viewed as self-serving and corrupt.

That has been spurred by fall-out from a sprawling, ongoing corruption probe known as “Operation Car Wash,” which has mired much of the political elite–including the popular Lula–in graft scandals largely centered on bribes, money laundering and illegal financing involving Petrobras.

Deeply unpopular current President Michel Temer did not run in these elections, and is also under investigation for alleged corruption.

The Workers Party, in power between 2003 and 2016 when the country went through a dramatic boom than a devastating bust, has felt most of the public ire, even though the scandals have been spread across parties of all stripes.

The probe “weakened a big part of the corrupt political class, but also created a vacuum filled by populists,” explained Ivar Hartmann, professor in public law at the Getulio Vargas Foundation.

Bolsonaro, he said, represented “a threat” to democracy.