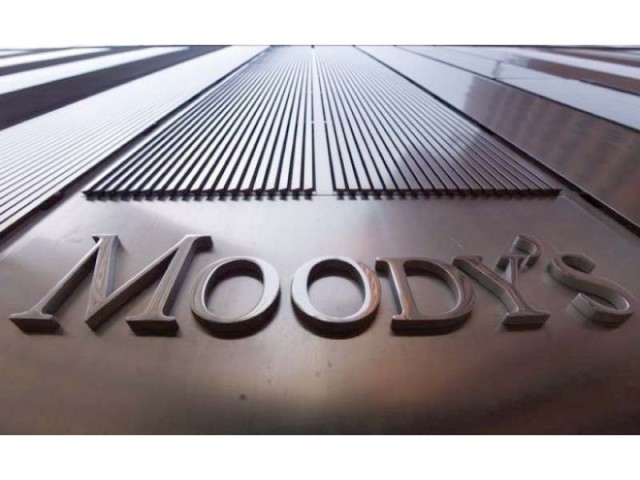 Additionally, support and technical assistance from the IMF would aid macroeconomic rebalancing and the government’s structural reform agenda. PHOTO: REUTERS

ISLAMABAD: An International Monetary Fund (IMF) bailout programme is crucial for Pakistan to meet its $30 billion external financing needs, said Moody’s Investors Service while casting doubt over the government’s plan to restrict the budget deficit to 5.1% of GDP without additional measures.

“An IMF programme will not only bridge the financing gap but will also serve as a strong signal to other official sector creditors that will be crucial to meet financing requirements over coming years,” said Moody’s, a credit rating agency, in its country assessment report.

Moody’s has estimated Pakistan’s gross external financing needs for ongoing fiscal year at around $30 billion, of which around $8 billion are the government’s external repayments. The financing gap is likely to be $8 billion to $9 billion, taking into account the government’s borrowing plans and Moody’s expectations of capital inflows including foreign direct investment and portfolio flows, it added.

These assessments are largely in line with the finance ministry’s estimates, which have become the base for approaching the IMF for a bailout package. The Fund’s team is coming early next month.

Moody’s said a more front-loaded programme would provide greater market confidence when Pakistan’s Eurobond and Sukuk repayments totalling $1 billion each are due in April and December 2019. 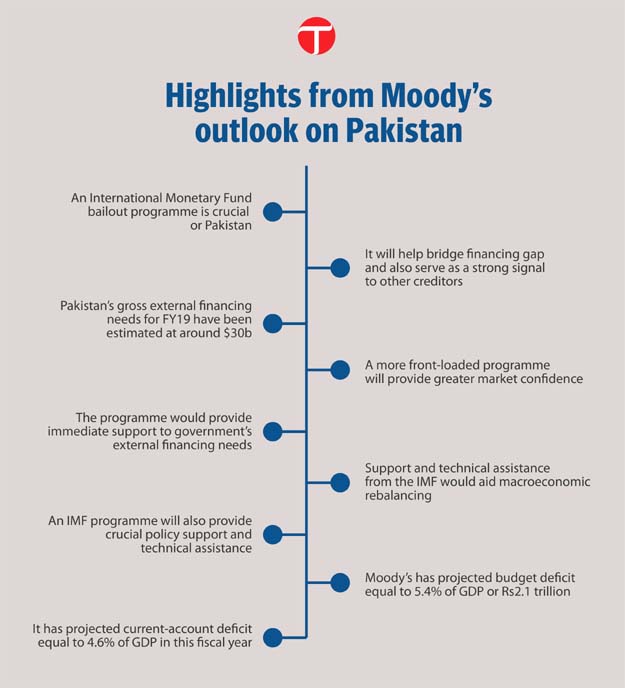 Moody’s has again highlighted high external and fiscal challenges, particularly in light of investments, imports and external borrowing related to projects under the China-Pakistan Economic Corridor (CPEC). But it said the government had pledged a reform-based policy agenda, including raising economic competitiveness through pro-business policies, addressing corruption issues, reforming state-owned enterprises, enforcing greater discipline in government spending and broadening the tax base.

For PTI, walk on tightrope ahead, suggests Moody’s

Macroeconomic and external imbalances have risen since the country’s previous IMF programme ended in 2016. In particular, foreign exchange reserves have fallen to low levels, sufficient to cover barely two months of goods imports and below the IMF’s minimum adequacy threshold of three months.

Moody’s has projected budget deficit of 5.4% of GDP or Rs2.1 trillion, which is higher than the revised target of 5.1%.

The ratings agency said despite the State Bank of Pakistan letting the rupee depreciate approximately 25% against the US dollar and hiking its policy rate by a cumulative 275 basis points since December 2017, the current account deficit remains wide. It has projected the current-account deficit equal to 4.6% of GDP in the current fiscal year, which is lower than the last year’s deficit.

Moody’s said external and fiscal risks would remain significant, in the absence of further macroeconomic adjustments. Ongoing implementation of CPEC projects, which will likely be 9% to 10% of GDP in this fiscal year, and higher oil prices will keep the import bill elevated.

It said the government’s export package in June 2018 was extended for three years through fiscal 2021 and is designed to boost export competitiveness and incentivise investment in export-oriented production by removing customs duty on export goods, reducing sales tax on exporters’ inputs and providing subsidies on certain raw materials.

Although this extension will benefit exports, they remain half the level of goods’ imports. Higher government spending has also contributed to the macroeconomic imbalance, according to the ratings agency.