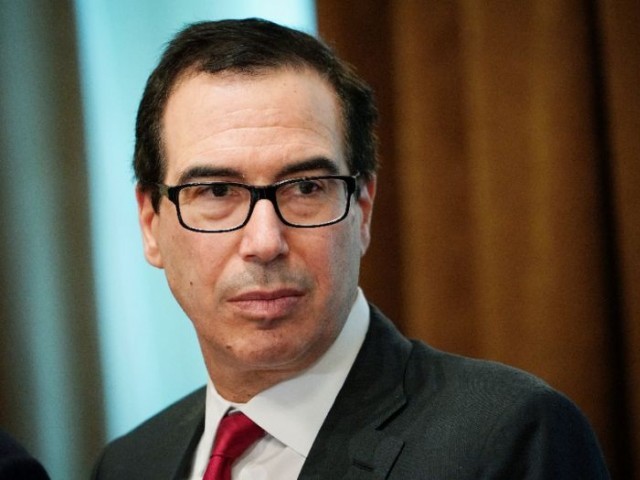 US Treasury Secretary Steven Mnuchin, pictured at the White House in June 2018, gave no explanation for pulling out of the Future Investment Initiative summit in Saudi Arabia. PHOTO AFP

WASHINGTON DC: US Treasury Secretary Steven Mnuchin and senior ministers from Europe on Thursday pulled out of an investment conference in Saudi Arabia, deepening the kingdom’s isolation amid an uproar over the disappearance of journalist Jamal Khashoggi.

Officials from some of Saudi Arabia’s leading Western allies joined a slew of corporate bigwigs who are now shunning next week’s gathering, touted as a high-powered showcase for the economic reforms of Crown Prince Mohammed bin Salman.

In an announcement that sent stocks tumbling on Wall Street, Mnuchin said he had decided with President Donald Trump that he would “not be participating in the Future Investment Initiative summit in Saudi Arabia.”

Saudi ‘rogue crown prince has got to go’, says US senator

The decision was given in a terse tweet after Trump and Mnuchin were briefed by Secretary of State Mike Pompeo, who has just returned from Saudi Arabia and Turkey to probe for answers over the journalist’s disappearance in Istanbul.

Mnuchin gave no explanation. But Britain and France — which like the United States are leading suppliers of arms to Saudi Arabia — made clear their disquiet over Khashoggi’s fate as they yanked their own representation at the Riyadh conference.

“We have taken this decision in a coordinated manner among Europeans,” President Emmanuel Macron told reporters at an EU summit in Brussels.

“It is what’s required in the short term, taking account of the gravity of the facts, in the absence of (Saudi) clarification,” he said, after French Economy Minister Bruno Le Maire confirmed he was staying away from Riyadh.

British International Trade Secretary Liam Fox said “the time is not right” to go to the Saudi capital for the October 23-25 conference, dubbed “Davos in the Desert.”

Khashoggi, who was living in self-imposed exile in the United States where he contributed to the Washington Post, vanished after entering the Saudi consulate in Istanbul on October 2.

Turkish media report that he was killed and dismembered inside the consulate by a hit squad which arrived from Riyadh — claims denied by the Saudi government.

“The UK remains very concerned about Jamal Khashoggi’s disappearance,” a British government spokesperson said in a statement, insisting that the Saudis abide by their pledge to carry out a full and transparent investigation.

“Those bearing responsibility for his disappearance must be held to account.”

The Netherlands said Finance Minister Wopke Hoekstra was no longer going to the conference, and that it was also cancelling a planned trade mission to Saudi in December.

Working with the EU and other partners, the Dutch government would “look at ways international concerns about Khashoggi could be addressed”, Foreign Minister Stef Blok said.

International Monetary Fund chief Christine Lagarde already pulled out of the conference this week along with several Western business leaders and media groups.

But while withholding judgment on the case, Trump and Pompeo in recent days have stressed the depth of US-Saudi cooperation in financial and counterterrorism matters stretching back for almost a century.