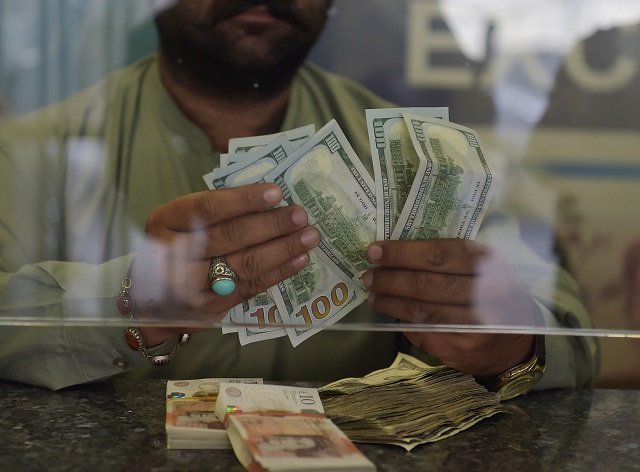 A currency dealer counts US dollars at a currency exchange shop in Islamabad on October 9. PHOTO:AFP

PESHAWAR: Even as the PTI government railed against the practice of taking foreign loans, the external portfolio of the province it ruled for the past five years has ballooned to a whopping $3.8 billion, forcing the government to set aside 1.5 per cent of the budget for repaying the loans and interests on those loans.

Despite the fact that Rs9 billion will be spent in retiring the interest and a further Rs7 billion on the principal amount of the loans, the provincial finance department feels that this sum “not heavy” in the fiscal year 2018-19.

“The money needed for the repayment of the loans makes it 1.5 per cent of the total budget which is not that heavy,” said Khyber-Pakhtunkhwa (K-P) Finance Secretary Shakeel Qadir Khan while responding to questions during the post-budget news conference at the Civil Secretariat Peshawar on Tuesday.

He added that the $3.8 billion also includes those loans figures which are still in process and have yet to be materialized.

Earlier during the news conference, K-P Finance Minister Taimur Saleem Jhagra gave a brief overview of the provincial budget— which he had presented in the provincial assembly just a day before.

Taking a veiled dig at the Pakistan Muslim League-Nawaz (PML-N), he said that the last provincial government led by the Pakistan Tehreek-e-Insaf (PTI) had managed its finances well which is why they were not facing a challenging situation — unlike the rest of the country.

“I am not happy with the figures for the long term,” he said, adding, “We need more money for development, although we have made plenty of allocations for the development side [in the current fiscal year].”

He added that for the ongoing fiscal year, they have identified five fiscal priorities including strengthening the province’s own revenue base, finding a compact solution to the Net Hydel Profit (NHP) and all the other dues with the federal government on a permanent basis.

“The third priority is to reduce the cost of the government. The province’s current expenditures are increasing by 20 per cent every year while the total outlay of the budget is increasing by 15 to 17 per cent annually,” Jhagra noted.

In this regard, he said that K-P Chief Minister Mahmood Khan had permitted them to visit each government department to work on reducing expenditures. Moreover, he said that they will work on bringing the private sector to the province to create jobs.

The fifth priority was to improve the budgeting mechanism wherein each department is responsible for their budget so that projects are not designed just to spend money.

Asked about taxes in the budget, the finance secretary said that they have not imposed any new tax, rather, the schedules have been altered. Moreover, those who were out of the sales tax on services net have been included in the schedule.

To a question regarding the Rs30 billion cushion in the budget, the finance minister explained that they have kept it to help the federal government in case of an emergency.

Questions were also asked about the completion date and cost of the on-going Peshawar Bus Rapid Transit (BRT) project. Planning and Development Secretary Shahab Ali Shah said that the civil work of the corridor is expected to be completed by the end of December and that the cost of the BRT is Rs66.4 billion.

Shah further said that the installation of the intelligent transportation system will be complete by next year.

“By March 2019, the bus will be ready for launch,” the planning secretary said.

Even though Prime Minister Imran Khan has stated his opposition to discretionary funds, the finance minister tried to defend the “Umbrella Schemes” listed in the annual development programme, stating that elected representatives have a better understanding of the needs of specific projects in their respective areas.

Raking in the foreign money

“The concept can be used,” he said, noting that it can be helpful if it is not exploited for political gains.

To a question regarding the services reforms committee headed by former State Bank Governor Dr Ishrat Hussain, the finance secretary said that K-P has 6,500 posts which they have declared as dying cadre — into which no further recruitments or additions will be made in the future. The existing members of the cadre will, however, continue to remain in service until the last employee retires.

Shakeel added that they have sought approval from the cabinet for this move, adding that once these posts are abolished, it will save the government Rs4 billion.