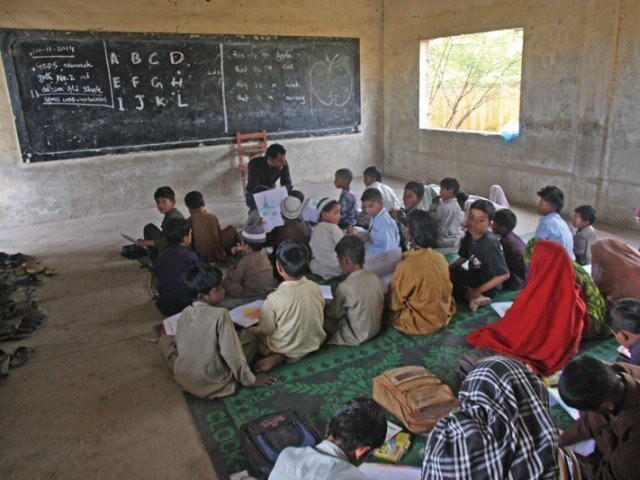 LAHORE: The Government Primary School, which is located in Kot Kashu Village in Gujranwala, is buckling under the weight of problems. The school has been neglected by the authorities concerned. Tall claims made by the government regarding improving infrastructure at government institutions appear to have fallen flat as the school remains a dilapidated structure.

The school, which was established in 1951, lacks proper classrooms to accommodate students.

A survey conducted by Express News showed that not a single classroom is clean or safe. Students are forced to study in deplorable conditions since the institution lacks basic facilities.

They are made to sit on the floor, be it either winters or summers, with a serious lack of basic facilities. The school’s state of affairs is poor and has not improved. The school lacks washrooms, classes, furniture and other basic facilities. Due to a serious dearth of schools in the area, students from neighbouring areas also attend classes.

However, their woes are not limited to the lack of basic facilities. The classrooms where the students study have cracked walls which can collapse any minute. The appearance of these rooms is a far cry from what a classroom should look like. For school staff, there are several other issues.

Students and teachers have urged the government to address these issues but to no avail. They have been protesting against the school’s state of affairs and have urged the education department and the Punjab chief minister to take notice of the matter.