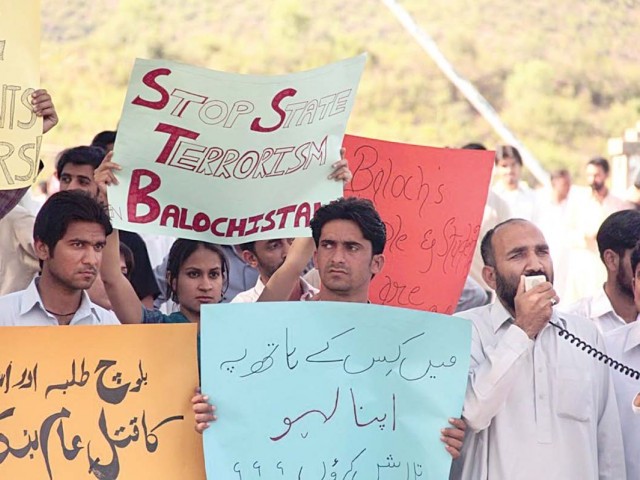 Students and professors of Quaid-i-Azam University protest the killing of Saba Dashtiar, a Balochistan University professor. PHOTO: THE EXPRESS TRIBUNE

Hundreds of students, professors and staff members of Quaid-i-Azam University on Friday protested against the killing of Saba Dashtiari, a Balochistan University professor.

A press release issued by the National Students Federation (NSF) said that the protesters held placards and demanded accountability of intelligence agencies. They said it would be impossible to bridge the growing gap between Balochistan and other provinces if repression against Baloch students, intellectuals and political figures continued.

They said it was the responsibility of the democratic government to counter politics of hate in the country.

Speaking on the occasion, Nazish Zahoor of NSF said that peace in Balochistan University had been destroyed over the past few years due to oppressive policies of the military establishment. She said killings of prominent figures like Dashtiari would only exacerbate the ethnic conflict. She added the target killings of Balochis had caused them to alienate themselves from the rest of the country and the “forces of separatism will only grow stronger” if the situation is not dealt with properly.

She added that universities are were supposed to promote tolerance of conflicting ideas in the society, as they are the centres of debate.

Professor Aasim Sajjad, while addressing the students, called for the academic community to join hands with the social and political forces to demand an end to such barbaric incidents.

“Only a few months before Prof Nazima Talib of the same university was murdered and it is clear that this murder was a form of reprisal,” he said. He added the situation will only get worse if more innocent people lose their lives.

Other speakers also spoke on the issue, highlighting the actions of intelligence agencies, which, according to them, are getting “out of control”. The protest ended peacefully without any unpleasant incident.