Record number of native American women running in US midterms

Record number of native American women running in US midterms

No native Americ­an woman has ever served in the US House of Repres­entati­ves
By AFP
Published: October 14, 2018
Tweet Email 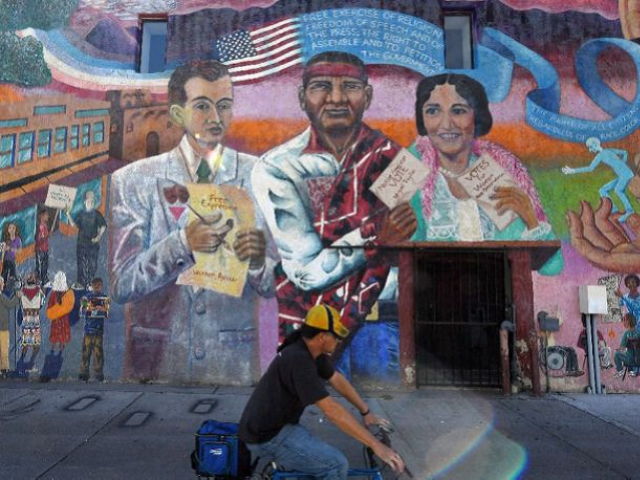 ALBERQUERQUE: No native American woman has ever served in the US House of Representatives. But a trio of female candidates running in New Mexico and Kansas are looking to erase that statistic.

Two are Democrats. The third is a staunch supporter of President Donald Trump. But all three hope to make a difference on Capitol Hill –and do their tribes proud.

“I’m a woman, a woman of color. That seems to be who we need in office right now to really push the issues that we care about,” Deb Haaland, who is running in New Mexico, told AFP in an interview.

The 57-year-old single mother also says she wants to be a “strong voice” for native Americans, other minorities and the poor.

Haaland is a member of the Laguna Pueblo tribe in New Mexico. So is Yvette Herrell, who is running in a different district–and is a dyed-in-the-wool Republican.

The two women have little in common, beyond their ethnic background.

Haaland supports abortion rights, Herrell is against them; Haaland supports immigration reform that would provide so-called ‘Dreamers’ with a path to citizenship, while Herrell wants to boost border security.

In Kansas, Sharice Davids–a lesbian lawyer and former mixed martial arts fighter who is a member of the Ho-Chunk Nation–is running for Congress as a Democrat.

Seven native American men are also running in the 2018 midterm elections–the total of 10 is double the number of indigenous candidates who ran in 2016.

On November 6, all 435 seats in the House and a third of the 100 Senate seats are up for grabs. The polls are seen as a key litmus test halfway through Trump’s first term in the Oval Office.

The increase in the number of native American candidates is not only in the Congressional races–more are also vying for seats in local and state legislatures, as well as governorships.

Mark Trahant, the editor-in-chief of Indian Country Today, a specialised digital news platform, says that 100 candidates are seeking office nationwide on all levels of government, including 52 women.
Both figures are a record.

For Trahant, Trump was certainly a motivating factor in leading more native Americans to try their luck at the polls.

“It certainly was the inspiration for people to say this time, ‘I’m actually going to run and not just talk about it’.”

Paulette Jordan and Andria Tupola are hoping to win the governor’s mansions in Idaho and Hawaii, respectively.

Among the men, Kevin Stitt is running for governor in Oklahoma, which is home to the only two native American congressmen currently serving–Tom Cole and Markwayne Mullin, both Republicans.

Throughout US history, more than a dozen native American men have been elected to Congress.

But Christine Marie Sierra, a professor emerita of political science at the University of New Mexico, says the explanation for the record number of native American candidates is a bit more complicated.

“It’s a longer story. It is a story that has been happening frankly since the 1990s with more women running for office and more women getting elected,” especially women of color, Sierra told AFP.

Traditionally, voter turnout among native Americans is lower than average–five to 14% points lower. So in order to get elected, an indigenous candidate needs to appeal to a wider audience.

For Sierra, “women of color in particular are very good candidates.”
“They can relate to voters as women, as racial minorities, as working class, as mothers,” she explained.

Cole, a member of the Chickasaw Nation who is expected to win re-election in Oklahoma, said it is “critically important that native Americans have a voice to represent their views and values.”

“I am always happy to see native Americans running for office, whether they are Democrats or Republicans,” Cole told AFP. “They make a valuable contribution to public debate and the legislative process.”

His colleague Mullin is running against a fellow member of the Cherokee Nation, Democrat Jason Nichols.

Nichols has charged that Mullin is a native American “in name only,” and is out of touch with indigenous communities.

“We deserve better,” Nichols told AFP, accusing Mullin of “callousness toward our environment, access to health care, protection for women who have been the victims of domestic violence”–all key issues for native Americans.

Haaland says she is ready to be “a voice on the other side of the aisle” from Cole and Mullin, while working with them on issues that matter to their communities–a list she says is topped by land, water and federal resources.

“With more indigenous people in office, we can make progress for all indigenous communities and to remind the United States that we are still here and our identity is valid,” she said in a recent tweet.