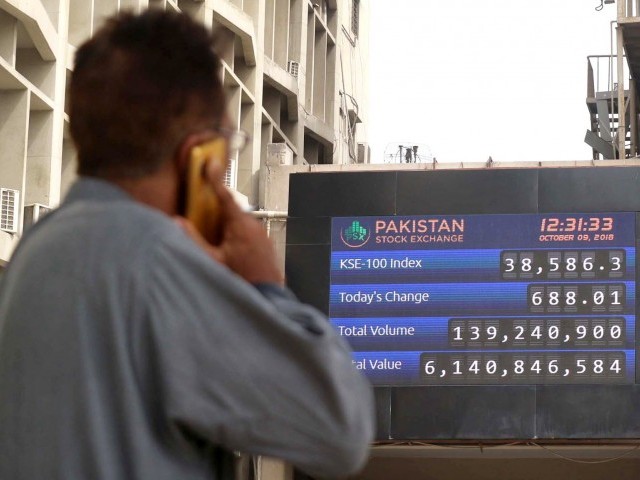 KARACHI: Stocks were hammered on Friday as the KSE-100 index plunged over 950 points in intra-day trading, slipping below the 37,500 mark. It closed the day in the red with some recovery.

Market participants reacted to a sharp dip in the foreign currency reserves held by the central bank, which slipped another $101 million and settled at $8.3 billion. The foreign exchange reserves have been on a downward path for seven successive weeks.

The KSE-100 index remained on a downward trajectory from the moment trading began as selling pressure mounted. At close, the benchmark KSE 100-share Index recorded a decrease of 880.37 points or 2.29% to settle at 37,517.93.

Commenting on the situation, Arif Habib Limited Head of Research Saad bin Ahmed told The Express Tribune, “Foreign selling on specific counters is of course a leading reason behind the current downturn.”

Besides, local financial institutions were also seen offloading part of their holdings across the board.

He revealed that heavy selling by foreign and local institutions was mainly in auto, bank and cement stocks. “They are in the phase of readjusting their portfolios in the wake of Pakistan’s negative economic outlook for two years,” Ahmed added.

In an earlier development, Pakistan has formally approached the International Monetary Fund (IMF) for a bailout. IMF Managing Director Christine Lagarde announced on Thursday that she would send a mission to Pakistan for bailout negotiations amid emphasis on full disclosure of the debt Pakistan had acquired including from China.

The analyst pointed out, “Everyone is foreseeing a rebound in the market any moment. But at the same time, everyone is selling as well to repurchase stocks at lower levels.”

There was confusion about the size of IMF bailout Pakistan was seeking. Earlier, there was talk that Pakistan would apply for a $8-12 billion bailout. Now, market talk suggests the package would be around $6-7 billion.

“If Pakistan receives a low amount, the problem of current account balance may remain in place over the medium term,” the analyst said.

JS Global analyst Danish Ladhani said the index came under pressure after street talk suggested that major heavyweights like Lucky Cement, United Bank and Habib Bank could be removed from the MSCI large-cap index in the upcoming semi-annual review on November 13.

It took a toll on the benchmark index, pushing it near the 37,500-point level.

Searl (-2.12%) in the pharma sector announced its FY18 results where the company reported consolidated earnings per share of Rs14.55 with a cash payout of Rs5 and bonus of 15%.

“Moving forward, we expect investor’s sentiment to remain choppy. Therefore, the KSE-100 will remain under pressure along with selling pressure from foreign investors,” Ladhani added.

Overall, trading volumes increased to 135.4 million shares compared with Thursday’s tally of 134.6 million. The value of shares traded during the day was Rs5.5 billion.

Shares of 363 companies were traded. At the end of the day, 60 stocks closed higher, 288 declined and 15 remained unchanged.

Foreign institutional investors were net sellers of Rs76.2 million worth of shares during the trading session, according to data compiled by the National Clearing Company of Pakistan.