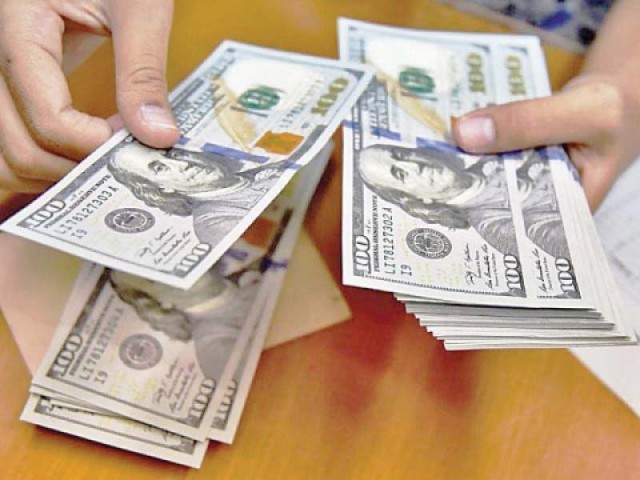 Last week, the IMF, in its proposed economic measures, urged the government to let the rupee depreciate to Rs145 to the US dollar in the inter-bank market. PHOTO: FILE

KARACHI: Pakistani currency hit a 10-week low at Rs129.50 to the US dollar in the open market on Monday as people invested heavily in the greenback in a bid to stave off losses in the event of further rupee weakness in inter-bank dealings.

“Demand for dollars has shot up by 70-75% in the last two days [Saturday and Monday],” a dealer at Dollar East exchange company told The Express Tribune.

“Supply [of dollars] shrank to 25% in these two days as potential sellers held back the greenback waiting for the much talked about rupee depreciation in the inter-bank market.”

“The demand for dollars was around $10 million and supply was around $3 million on Monday,” Pakistan Forex Association (PFA) President Malik Bostan said. The rupee lost value after the government hinted at going back to the International Monetary Fund (IMF) for a bailout to manage import payments and debt repayments in the near future.

Last week, the IMF, in its proposed economic measures, urged the government to let the rupee depreciate to Rs145 to the US dollar in the inter-bank market and increase the benchmark interest rate from 8.5% at present to overcome the foreign payments crisis.

The inter-bank market, however, remained largely stable at Rs124.3 on Monday.

Pakistan’s foreign currency reserves dropped to a critically low level of around one and a half month of import cover at $8.40 billion on September 28, 2018, according to the State Bank of Pakistan (SBP).

Besides, it has revised the benchmark interest rate upwards by 275 basis points to a 44-month high at 8.5% in the last nine months.

Analysts said the devaluation and interest rate hike were a must to pull down aggregate demand to overcome the balance of payments challenge and cool down the overheated economy. This would, however, slow down the real economic growth.Exchange Companies Association of Pakistan (ECAP) General Secretary Zafar Paracha and PFA’s Bostan have demanded that the government clarify the situation on the economic front.

Otherwise, the speculation would continue to dominate the currency market and keep it uncertain, they added.