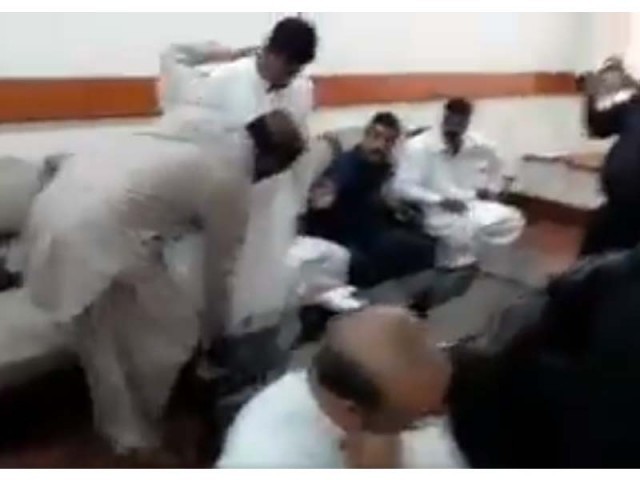 In the footage it can be seen that the Shah gives the clerk who had been identified as Janib Keerio to bow down to the man, after which he is given a dressing down by the minister. SCREENGRAB: @Khalidki/TWITTER

Day after his humiliating video went viral, Sindh Education Minister Syed Sardar Shah has punished a Matiari college clerk by forcing him to bow down to the student’s father he had forced to do the same for admission.

In the footage it can be seen that Shah directs the clerk, who had been identified as Janib Keerio, to bow down to the man, after which he is given a dressing down by the minister.

Yesterday, a video of Keerio humiliating a female student’s father over admission was doing the rounds on social media.

The girl’s father, who had visited the New Saeedabad Government Degree College for admission, was made to plead on his knees by the senior college clerk.

In the footage, the father can be seen pleading to Keerio to at least return his daughter’s mark-sheet if he is not giving her admission.

However, the college staffer’s high-handedness led to the man forced to beg on his knees for him to return it despite others also telling him to do so.

After the video went viral on social media, Shah called for action to be taken against Keerio along with the college’s administration with the authorities already having suspended him over the incident.

BREAKING UPDATE: Sindh Education Minister force education dept clerk to bow down before the man who was humiliated by him in New Saeedabad for failing to pay bribe in return for MA admission form pic.twitter.com/i7fL3yNeoR