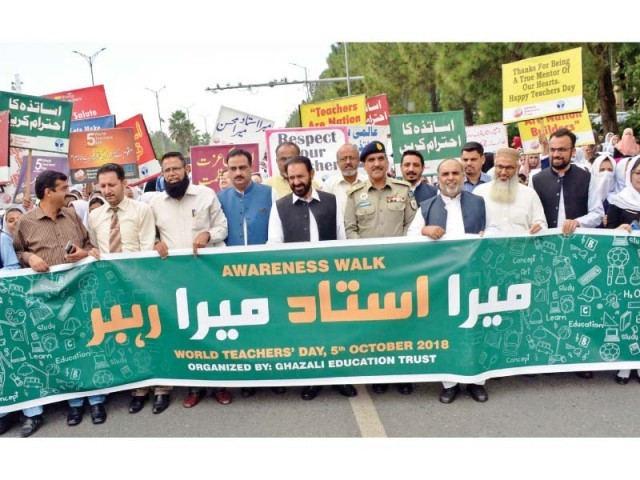 ISLAMABAD / RAWALPINDI: Teachers will be required to only teach in the classrooms, all non-teaching duties like election and census will be withdrawn from the educators, said the Punjab education  Minister Dr Murad Raas.

Talking to a delegation of Punjab Teachers Union he said parents who do not enroll their children will be prosecuted and soon government will draft a law in this regard.

“Teachers are a respected section of any society and their problems should be resolved,” he assured representatives of teachers including Chaudhry Sarfaraz, Rana Liaquat and Sajjad Akbar Kazmi.

Meanwhile in Islamabad, a rally was taken out on Jinnah Avenue to highlight the importance and respect of teachers.

Private Schools Network (PSN) President Afzal Babar said that the government was trying to improve the state-run schools and it should also work for the betterment of private institutions.

The rally tried to move towards D-Chowk, however it was stopped by a contingent of riot police. The rally did not have the official permission to converge on D-Chowk therefore it was stopped, police said.

The participants stopped there for some time, chanted slogans, made some speeches extolling the role of teachers in society and then dispersed peacefully.

PSN held a protest outside the National Press Club to mark the World Teachers’ Day. PSN President Afzal Babar said Pakistan ranks 146 on literacy ranking because there is no value of teachers here.

Instead of encouraging educators, government functionaries threaten and harass teachers. As long as teachers are not happy and content literacy rate will not rise, Babar said.

Private schools’ representatives chanted slogans and raised banners in favour of their demands and kept the traffic disturbed on Muree Road for at least an hour. Afterwards, they dispersed peacefully.

Separately, a number of events were held across twin cities to honour teachers.

Many other events were also held across the twin cities to honour the educators.