It was Januar­y 2008, a relati­vely cold mornin­g in Dubai. I was walkin­g on Shaikh Zayed Road after parkin­g my car about...
By Saqib Omer Saeed
Published: June 2, 2010
Tweet Email 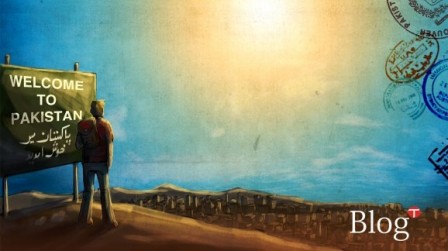 Pakistan is among the richest countries in the world, but also suffers from a poor economy.

It was January 2008, a relatively cold morning in Dubai. I was walking on Shaikh Zayed Road after parking my car about 300 meters from the meeting point with my client. I stopped suddenly before Crown Plaza upon hearing a Pakistani labourer arguing with a guy, claiming that UAE was not a rich country.

I went up to the gentleman and said “Khan Sahab are you crazy? You are standing on Shaikh Zayed Road, the heart of Dubai and you are saying that this country is not rich?”

He smiled and responded with a statement that I can never forget. He asked me to ignore all the big buildings, the infrastructure and the trade and then see what the country really had to offer.

These days I have been reading articles on the forthcoming budget and Pakistan’s economy. Being an analyst I am also involved in debates on VAT, capital gain tax and other technical issues. But I am still intrigued by Khan Sahab’s statement, and for the sake of analysis there is no harm in taking a look at where Pakistan stands.

I must stop the count here for I already feel ashamed.

Khan Sahab you were right. Dubai is not a rich country. Dubai is actually a rich economy. Pakistan on the other hand is among the richest countries in the world, but also suffers from a poor economy.

It is quite amazing that the country that is chasing the realization of coalition support funds of 349 million dollars from the USA also happens to possess 185 billion tonnes of Thar coal which is worth an estimated 25 trillion dollars.

The country that faces a severe energy crisis has the potential to generate power supply for the next 100 years by utilizing the same coal reserves.

This coal utilization can save four billion dollars by reducing oil import costs. Dr Murtuza Mughal of Economic Watch stated that coal power generation can cost Pakistan Rs 5.67 per unit for power generation while IPPs cost Rs9.27 for the same. Other than coal, Pakistan is also rich in wind and bio resources of energy.

The point is simply to understand that the way our finance ministers portray the situation does not represent our true economic potential. It is really a shame that we declare it our success and best planning to successfully acquire aid packages from IMF, World Bank or the USA on time.

It is really worrying to think that the financial success of the government in our country is on the basis of financial arrangements rather than economic management.

Our governments feel happy to appoint IMF, World Bank or investment banking professionals as economic chiefs of the country. They either simply ignore the important economists for these positions, or they are just interested in short term fiscal management.

It is high time that our focus on economic planning and budgets to shifted towards clear cut economic goals for developing an industrial base in the country.

We need to come up with policies that ensure a culture of entrepreneurship in the country. Income support programmes cannot serve the objective of economic freedom. It is actually the facilitation of doing business and converting ideas into returns that can change the economic outlook of Pakistan.

We sit over a resource bank of trillions of dollars while we chase millions to survive. This myth of the poor economy of the richest country has to end.

Our prime issues are not VAT, capital gain tax etcetera. The biggest issue is the under utilization of the massive resources available in this land, where our federal budgets has been silent for years. This issue is directly related to poverty reduction as well as developing confidence in the people of Pakistan and about their future.

We need to see beyond fiscal management and look towards true economic management of our country.

Saqib Omer Saeed is a Financial/Business Researcher Analyst and adjunct faculty for Investments and Finance in CBM, SZABIST, BIZTEK & University of Karachi and blogs at www.bizomer.com