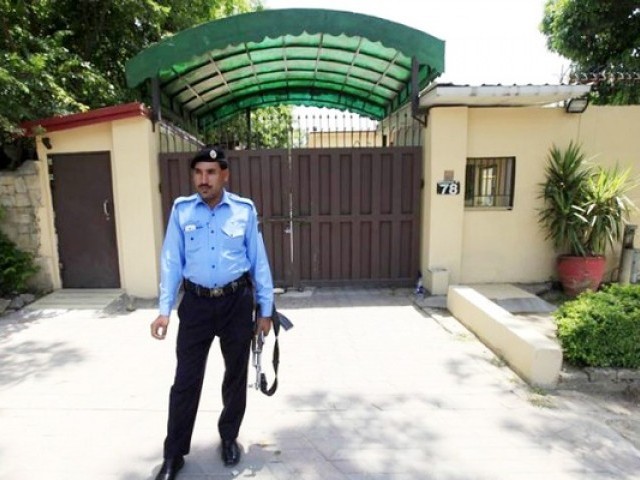 A policeman stands guard outside the Save the Children charity's office in Islamabad. PHOTO: REUTERS

ISLAMABAD: The government of Prime Minister Imran Khan is unlikely to relax the registration process for international non-governmental organisations (INGOs), and carry on with the policy adopted by the previous regime.

“The policy for [registration] of INGOs is same – one that was devised by the interior ministry a couple of years ago. However, it remains to be seen if the present government goes for a change or not,” a top official of the Ministry of Interior told The Express Tribune.

Earlier, there were reports that diplomatic pressure is being put on Pakistan by several countries, including some belonging to European Union (EU), to relax the process of registration of INGOs.

4,500 NGOs in Sindh exist only on paper, confirms CM adviser

According to the reports, ambassadors to Pakistan of the US, Canada, Australia, Japan, Norway, Switzerland and a few EU countries had written a joint letter to the new government a week back, expressing their concern over the strict registration process for INGOs.

The foreign ambassadors were of the view that the INGO registration process had further narrowed the operation space for international partners engaged in development cooperation in the country.

When asked to comment on the reports, the top official of the ministry said, “We are implementing the existing policy on INGOs.”

Also, during his first interaction with the media, Minister of State for Interior Shehryar Khan Afridi said that the interior ministry would soon announce a comprehensive policy on the implementation of the National Action Plan on Counter Terrorism (NACTA), INGOs regulations and other major issues related to internal security.

The ministry official, however, said things were not yet clear and the government policies on all these matters were still awaited.

During the last quarter of 2015, former interior minister Chaudhry Nisar Ali Khan had formulated a policy under which all INGOs operating in Pakistan or desirous of operating in the country were required to register themselves with the Ministry of Interior by signing a memorandum of understanding (MoU).

At present, 141 INGOs have applied online for registration with the Ministry of Interior. Of them, 66 have the status of ‘approved INGOs’ while the registration process of 72 INGOs is still underway. Besides, 63 INGOs have signed the MoU so far.

Chaudhry Nisar had claimed that before 2015, there was a complete laissez-faire approach over the entry of foreigners into the country. He also said that at least 122 INGOs were receiving international grants and operating all over the country, including sensitive areas, without any check.

In June 2015, the government of Nawaz Sharif had decided to take the issue of INGOs registration out of the purview of the Economic Affairs Division and transfer the subject to the Ministry of Interior.