Expect­ed to give his party’s by-poll campai­gn a boost
By Sardar Sikander
Published: September 29, 2018
Tweet Email 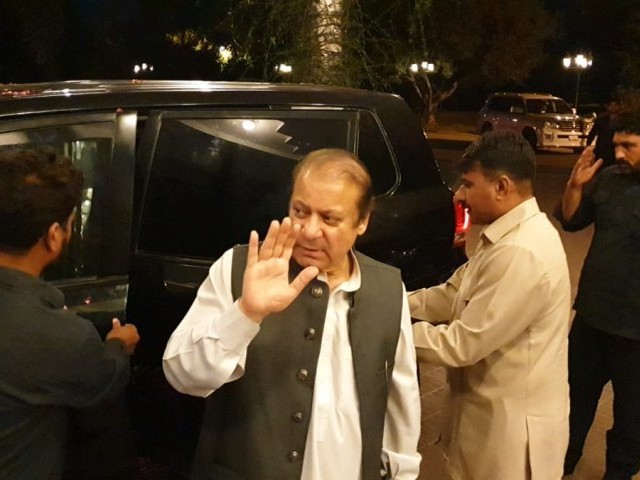 ISLAMABAD: Nawaz Sharif reentered the political arena after a gap of more than three-and-a-half months in Murree, his favourite hill resort, prior to by-elections.

The former PM arrived in Murree earlier on Thursday night.

He has since been staying there at his luxurious residence located at the Kashmir Point near the Mall Road.

On Friday, Nawaz held meetings with party workers from Murree, Rawalpindi and Islamabad, besides visiting the local press club where a condolence reference was held in connection with the death of Nawaz’s wife and former first lady, Kulsoom Nawaz.

All through the day, the former PM was accompanied by some senior party leaders, including Senator Asif Kirmani, it is learnt.

The former PM is in Murree at a time when top local leaders, including former PM Shahid Khaqan Abbasi, are in Lahore. Abbasi is in Lahore for his by-election campaign in the NA-124 Lahore constituency.

PML-N’s Secretary-General and former provincial minister Raja Ashfaq Sarwar, also from Murree, is in Lahore too undergoing medical treatment after suffering a brain hemorrhage a few weeks ago.

Nawaz is likely to stay in Murree for the next few days.

The former PM did not appear in the Accountability Court in Islamabad on Friday after he was granted exemption from appearing in person in the Al Azizia reference. He is due to appear on Monday.

Till his upcoming appearance at the Accountability Court, Nawaz is expected to stay in Murree.

Nawaz also visited the residence of his younger brother, the late Abbas Sharif, in Murree where he attended guests who offered condolences over Kulsoom’s death, sources in the PML-N said.

Nawaz is likely to step up his political activities from the first week of October by holding gatherings and address corner meetings of PML-N’s by-election candidates, PML-N sources said.

The by-polls are scheduled to be held on 11 National Assembly seats, 13 of the Punjab Assembly, nine Khyber-Pakhtunkhwa Assembly and two seats each of Sindh and Balochistan Assemblies.

Senior PML-N leaders cited three factors that might help boost the N-League’s vote bank. They included bail granted to Nawaz and his other two family members by the Islamabad High Court in the Avenfield Apartments reference, allowing him to canvass freely for by-elections, sympathy vote in the wake of Kulsoom’s death, besides capitalizing on unpopular decisions taken by PTI.

Nawaz was mainly detached from political activities since June 14 when he and his daughter Maryam Nawaz left for London to attend ailing Kulsoom.

On July 6, the Accountability Court announced its verdict in the Avenfield Apartments reference and sentenced Nawaz to 10 years in prison, seven-year sentence to his daughter, Maryam, besides awarding a year-long prison term to Maryam’s husband Capt (retd) Sadfar.

Nawaz and Maryam arrived in Pakistan on July 13 and were immediately flown to Adiala Jail Rawalpindi soon after they landed in Lahore.

Safdar was arrested and jailed a few days before the two other Sharifs.

On September 11, Kulsoom lost a year-long battle with cancer and breathed her last in London.

The same night, Sharifs and Safdar were granted an initial 12-hour parole and flown to Lahore in connection with Kulsoom’s funeral at Jati Umra in Raiwind.

On September 12, the parole was extended to five days and the three were jailed again on September 17.

On September 19, the IHC ordered the release of Nawaz, Maryam and Safdar on bail.