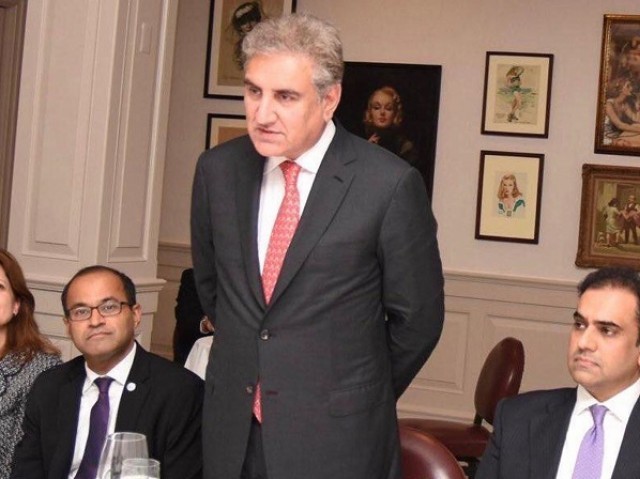 Alluding to India, the foreign minister said one country’s behaviour was a barrier to regional connectivity and well-being and added that the regional cooperation body has been unable to make significant progress.

When asked if he spoke to his Indian counterpart, Qureshi said Swaraj left in the middle of the SAARC meeting. He also said he paid careful attention to her statement and call for regional cooperation but how could such an objective be possible when India was acting as a barrier to said cooperation.

“The foreign minister emphasised that one country was holding the 1.7 billion people of South Asia hostage, while making vague statements and unsubstantiated, whimsical allegations. The SAARC summit has already been delayed by two years, with no end in sight,” said a statement by the Foreign Office (FO).

Earlier, the Indian external affairs ministry had confirmed that foreign ministers of Pakistan and India would meet on the sidelines of the UNGA session, but the Narendra Modi-led government backed out of the talks a day later.

The Indian foreign ministry said the talks were called off after the “latest brutal killings of security personnel by Pakistan-based entities and the recent release of a series of twenty postage stamps by Pakistan glorifying a terrorist and terrorism”. It did not provide further details about the alleged killings.

Reacting to the cancellation of talks, FM Qureshi said India had not responded positively to Pakistan’s invitation for dialogue. “It seems that India is already preparing for its elections due in the country next year,” he said. “Pakistan had asked for the talks in the larger interest of the region.”