Pakistan, Kuwait fail to reach accord on lifting visa curbs

Pakistan, Kuwait fail to reach accord on lifting visa curbs 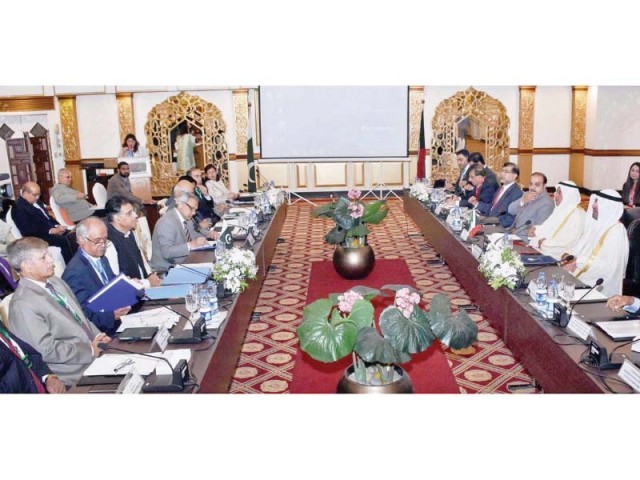 Kuwaiti delegation promised to consider some practical measures to lift the embargo only on business visa requests. PHOTO: APP

ISLAMABAD: Pakistan and Kuwait have ended talks without reaching a major breakthrough in dispute over visa restrictions, which has hampered cordial relations between the two Muslim countries.

The fourth meeting of the Joint Ministerial Commission (JMC) ended in Islamabad on Thursday without signing of an agreement on lifting visa restrictions on Pakistani nationals. The huddle was co-chaired by finance ministers of both the countries.

Sources said the issue of oil supply on deferred payment was not discussed in the JMC. Getting oil on credit from Saudi Arabia and Kuwait are among the options Pakistan is considering in order to tackle external-sector problems.

Pakistani officials revealed that Finance Minister Asad Umar emphasised the need for lifting visa restrictions on Pakistani nationals, which has become a major hurdle in the way of bilateral trade and economic relations.

The Kuwaiti delegation promised to consider some practical measures to lift the embargo only on business visa requests, according to officials in the Ministry of Finance. However, there were no clear commitments to remove the restrictions on all types of visas.

Kuwait promised that it would inform Pakistan about the practical steps by the end of next month. However, similar commitments had also been made during a visit of former prime minister Nawaz Sharif to Kuwait in March last year.

Pakistani side expressed serious concern over the continued visa curbs since 2011. Kuwait was once among the main destinations for expatriate Pakistanis. However, both the sides agreed to form a working group that would look into labour market requirements of Kuwait aimed at receiving skilled workforce from Pakistan.

Pakistan offered Kuwait the benefit of trained workforce in the fields of agriculture, automobile, construction, health and textile, the officials said.

Islamabad urged the oil-rich Gulf Arab nation to give its assent to a memorandum of understanding (MoU) for the recruitment of Pakistani professionals through the public sector. The Kuwaiti delegation promised response to that issue in the next two months.

Both sides also discussed bilateral economic and trade relations, noting that the current level of bilateral trade did not fully reflect the potential. The Kuwaiti side expressed its interest in enhancing shipping service between Gwadar and Kuwaiti ports.

Pakistan invited Kuwaiti investors to invest in the Special Economic Zones (SEZs), Gwadar Port Free Zone and establish country-specific free zones to enhance bilateral investment. The JMC stressed the need for early implementation of the agreement for the Encouragement and Protection of Investment, which was signed seven years ago but had not yet been implemented, the sources said.

The commission agreed to implement provisions of the Protocol of Cooperation signed 17 years ago to cement relations between chambers of commerce of both the countries. However, no major milestone could be achieved.

Pakistan also proposed the setting up of Pak-Kuwait Joint Business Council and Joint Working Group on trade and investment between the two countries. However, the future roadmap was left to be decided through diplomatic channels.

Sources said Pakistan sought Kuwait’s help for early finalisation of a free trade agreement between the Gulf Cooperation Council and Pakistan. Both the sides also discussed the possibility of making joint investments in the fisheries sector of Pakistan.

For enhancing banking cooperation, the joint commission underlined the need for opening banking channels between the two countries. Pakistan urged Kuwait to explore the possibility of signing an MoU between central banks of both countries.