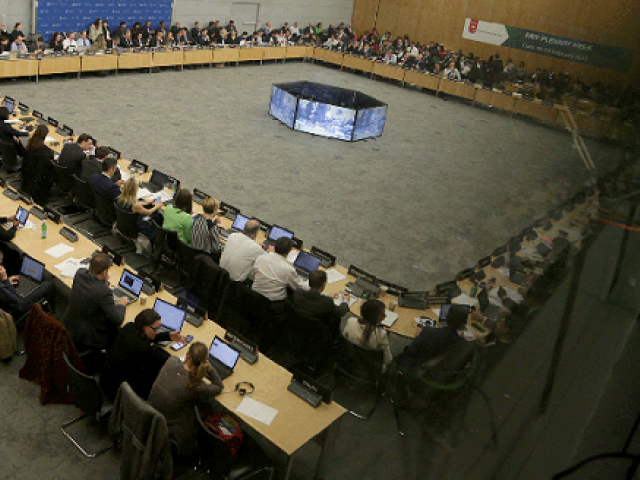 A meeting of the FATF. PHOTO:FATF

The recent raids of the Federal Investigation Agency on the currency dealers in the famous Sarafa Bazaar of Peshawar triggered afresh the debate on the issue of money laundering and the associated menace of terror financing and the rough ride Pakistan is experiencing with the Financial Action Task Force (FATF). Sarafa Bazar — though mainly known as the gold jewellery market of Peshawar — has also evolved to become a hub of the non-banking channel of money exchange, commonly known as hawala and hundi. According to an estimate, about 250 dealers are attached to this lucrative business. The business received an impetus with the migration of Afghans to Pakistan in the wake of conflict that engulfed Afghanistan in the 1970s.

The non-banking money transfer business proved unstoppable as it grew to cater to the demands of Pakistani workers living abroad who wanted an easy and inexpensive system for sending remittances. When a facility is unregulated it soon attracts criminal gangs as well. The hawala system was no exception and it soon became a conduit for illicit money, especially drug money. I can recall a kidnapping case which I had to deal with in 1987 when I was posted as ASP in Peshawar. A local college student was kidnapped, which was found to be a result of failure of the father of a money exchanger to deliver money earned through drugs trade to a person in Dara Adam Khel. The dispute was ultimately settled through a jirga of elders of Mohmand and Afridi tribes.

Successive governments had considered disrupting the hawala business, but the business kept flourishing. It also proved a helpful and efficient conduit for funnelling money to the Afghan groups in the Zia era. Commanders of the Afghan Jihad got heavily involved in the hawala- related money, making it a big business. During my career, I saw a member of the Hazar Buz tribe making billions in this money-exchange business and soon he became a blue-eyed boy of all important sections of the power structure in Pakistan. He not only obtained Pakistani citizenship but also now owns big businesses and factories on both sides of the border.

The unregulated money-exchange business caught the attention of leaders of developed countries when after the 9/11 incident terrorism emerged as an important international issue. Ungoverned spaces and the movement of money became central to the strategic policies of the US and its allies. While initiating direct military action, choking the financing of terrorism also became a focal objective. The urgency to tackle the problem of money laundering and related terror financing found its way in the more proactive role of the Financial Action Task Force in enforcing its recommendations upon countries that have unregulated money-exchange mechanisms.

There is no denying the fact that many Pakistanis associated with travelling agencies and hotel business in countries like the UAE and the UK often indulge in the hawala-based money exchange business. But when the FATF called for strict implementation of its recommendations, those countries clamped against such transactions effectively. Unfortunately, Pakistan remained lukewarm in complying with the standards set by the FATF. Pakistan, along with other eight countries, has been unable to make much headway. Stories of raids by the FIA on money exchangers’ premises are flashed in the media and then the business resumes as usual. For instance, recently as a kneejerk reaction to the international pressure, FIA sleuths, instead of registering cases under relevant sections of the money-laundering legislation and the Anti-Terrorism Act, detained currency dealers under the Maintenance of Public Order Ordinance. The dealers, therefore, challenged the action in a writ petition and the High Court set them free.

Pakistan is not deficient as far as relevant legislation is concerned. The weakness lies in the area of implementation. Capacity building of investigative agencies and the judiciary is needed as the old system is ill-equipped to deal with white-collar crimes. The problem of money laundering will remain if the country has safe havens and tax black holes. Not only the economy in general is undocumented, we have areas like Malakand Division, the old Fata and B Areas of Balochistan, where our tax laws do not operate. Such exempted areas and the agriculture profession provide a cover for tax evasion and promotes flourishing of black economy. According to a World Bank report, the stealth economy of tribal areas (old Fata) alone was around $30 billion. To make matters worse, the government in its mini-budget has allowed the non-filers of income tax to buy property and vehicles thus further regularising tax evasion and shadow economy.

Another grey area is the regulation of charitable and non-governmental origanisations among which many are on the black list of the UN and the US, as these are allegedly involved in channelling money for terrorism. Anti-money laundering efforts also suffer from the fact that corruption is rampant at lower levels of investigative agencies. The agencies usually tasked with investigating money gained through drugs are the Anti-Narcotics Force, the police, customs and the provincial excise departments, while cases of violation of currency laws are dealt by the FIA, the State Bank and commercial banks. My experience has shown that most of the officers of these organisations are not even aware of the relevant sections of laws from wherein they derive their legal authority. Thus, capacity building of law- enforcement organisations needs to be a top priority if an anti-money laundering regime is to be effectively enforced in Pakistan.

Local governments and the PTI