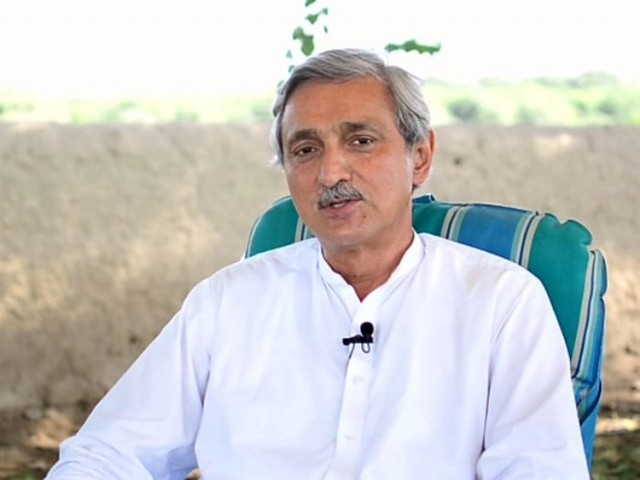 “Documents and the grounds taken by the petitioner, we do not find the ground for review is made out, therefore, the review petition is dismissed,” says the order passed by a three-judge bench of the apex court.
The order was issued after the bench headed by Chief Justice of Pakistan Mian Saqib Nisar heard arguments of Tareen’s attorney Sikandar Bashir Mohmand for almost one hour.

Other members of the bench were Justice Umar Ata Bandial and Justice Faisal Arab.

The same bench on December 16, 2017 declared that SVL, an offshore company, was established by Jahangir Tareen which has the legal title of property measuring 12 acres known as “Hyde House”, but the actual, true, real and beneficial owner of the said property is Tareen.

The court in its 81-page verdict observed that Tareen has sent around more than Rs500 million at the exchange rate prevalent at that time and claims the amount to have been utilised for the purposes of purchase and construction of “Hyde House”.

“SVL or Hyde House was never transferred to any trust by the respondent; thus, it is his asset which he has failed to declare in his nomination papers filed on September 9, 2015 according to the mandate of the law to contest the by-elections from NA-154 Lodhran and; therefore, he is not honest in terms of Article 62(1)(f) of the Constitution read with Section 99(1)(f) of ROPA.”

SC to take up Tareen’s review plea on Thursday

In view of rejection of his review petition, Tareen’s hope to resume preliminary politics has ended as his all legal remedies have been exhausted.

Likewise, he could not hold any portfolio of a political party in view of the SC’s judgment wherein former prime minister Nawaz Sharif was disqualified to become party head.

Interestingly, it was Tareen, who convinced the PTI leaders to move the Supreme Court seeking disqualification of Nawaz Sharif on the basis of concealment of assets.

Later, he was the man behind the legal strategy evolved in the Panamagate case. However, he was unaware that he will himself fall victim of his own the legal battle.

Legal experts believe it is time for political parties to learn from their mistakes and bring effective legislation to remove permanent bar on politicians under Article 62 (1)(f) of the Constitution.

Interestingly, a murderer can contest elections after a specific time, but a lawmaker, who lies under oath, has been barred permanently.

During Thursday’s hearing, Tareen along with his several supporters was present in the courtroom to witness the proceedings of his case.

However, they were stunned over the judges’ fiery queries and observations about concealment of assets by Tareen. The chief justice remarked that everything was done by Tareen in ‘fraudulent manner’.

A senior PPP lawyer, who was present in the courtroom, believes that it could have been much better if Tareen tried to defer the case till Justice Nisar’s retirement.

However, he wondered that though the SC disqualified Nawaz Sharif and Jahangir Tareen, it cleared Khawaja Muhammad Asif in a matter of a similar nature.

At the outset of the hearing, the chief justice questioned the petitioner’s counsel that how much amount had been sent abroad by Tareen. He also said that the money which was sent abroad should be returned. However, Mohmand said that Tareen sent around Rs500 million through legal means. “He even paid the tax.”

But the chief justice was unimpressed with his justification and revealed that the court may take suo motu notice over his involvement in insider trading ten years ago, wherein he returned the Rs70 million that he made through illegal means. “Unfortunately, we ignored this aspect in our earlier verdict,” the chief justice remarked.

He also wondered, “When Tareen himself purchased the property, constructed the Hyde House and now residing in it, then how can he said that he is not the beneficial owner of this property.”

Regarding the trust deed, the chief justice noted that Jahangir Tareen and his wife are “discretionary lifetime beneficiaries” of the trust. “You (Tareen) even submitted the trust deed very reluctantly,” he observed.

When Mohmand explained that Tareen was not the beneficial owner in view of the trust deed, the chief justice told him that they did not accept that it was a valid trust.

“It does not behoove of politicians like him (Tareen) to stash the wealth outside the country. Its colourable exercise by him,” he added.

When Tareen’s counsel got emotional after the bench queries, the chief justice asked him to remain calm and keep his voice low.
Justice Bandial noted that in view of the trust deed, Tareen was controller of the trust, adding “It’s very difficult for the court of law to accept this structure”.

“When you are a public office-holder, then you should disclose such assets,” he added.

Justice Bandial also questioned why Tareen did not disclose the ‘letter of wishes’.

He also asked Mohmand that the structure was created by Tareen to hide the properties, adding that those were concealment of the assets.
Justice Bandial was of the view that such arrangements of holding properties can be acceptable for private individuals but public office-holder should have disclosed each of their financial interest under Pakistani law.

Mohmand submitted some fresh documents for the first time regarding the trust to establish that Tareen was not the beneficial owner of the property.

“These documents also prove that there has been not any act or omission neither on my part nor any ulterior intent which would warrant declaration of dishonesty against myself.”

The bench asked him that why he did not submit those documents during the hearing last year, adding that we were asking the documents again and again.

The counsel said that those documents were under the custody of trustees and shared with him after the issuance of verdict.

However, he could not convince the bench to accept the review petition. At the end, Tareen came to the rostrum, but he was not allowed to address the court.

Sheikh relied on an editorial of an English daily and SC judge Justice Qazi Faez Isa’s minority opinion wherein he framed seven detailed questions suggesting constitution of a full court to settle those seven pertinent questions that needed a final resolution in the light of conflicting interpretation of the SC in matters relating to the scope of Articles 225, 184(3) and 62(1(f) in election disputes regarding disqualification of elected members.
Sheikh said, “It is an appropriate time to form full court to resolve the controversy about conflicting judgments about the applicability of Article 62(1)(f) of the Constitution.”

“If the SC will not do the same, then it might have severe repercussions as floodgate of corruption cases will start coming for litigation.”

However, the court noted that they could not find any reason to form full court; therefore, the application is dismissed.

On the other hand, Sheikh requested the bench to adjourn the review petition, seeking Imran Khan’s disqualification as he was abroad and he could not prepare the case. Upon this, the court adjourned the case for an indefinite period.