At least a dozen people who were trappe­d beneat­h the rubble­
By AFP
Published: September 26, 2018
Tweet Email 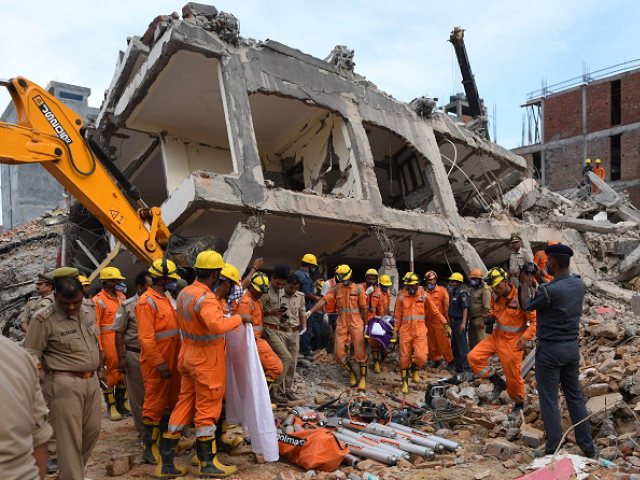 NEW DELHI: Five people were killed Wednesday when an apartment block collapsed in New Delhi, crushing residents beneath mountains of concrete, in the latest building accident to hit India.

Rescuers combing the wreckage with sniffer dogs in Delhi’s north pulled out at least a dozen people who were trapped beneath the rubble.

“We can confirm the deaths of five people. Rescue teams at the site are still clearing the debris,” local police official Sarat Chandra Nirmal told AFP.

An AFP photographer at the scene saw the bodies of two children being pulled from the rubble.

The block was located in a cramped, middle-class neighbourhood where many buildings share common walls.

The Press Trust of India quoted an unnamed local official saying the building was 20-years-old and structurally unsound.

Other local media reported the fourth floor of the block was illegally constructed.

It is just the latest in a string of deadly building collapses in India.

In July, a six-storey building collapsed on the outskirts of Delhi, killing nine.

A massive influx of people to cities in search of jobs and a shortage of cheap housing has fuelled the construction of illegal buildings across India. Many are built with sub-standard materials.

Millions also live in dilapidated old buildings, many of which are susceptible to collapse during rain.