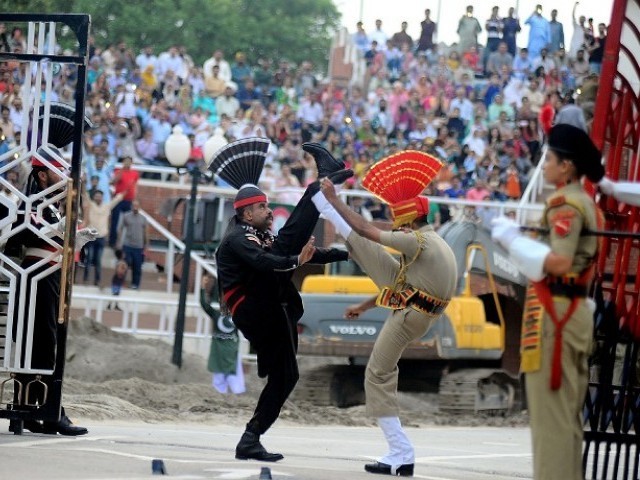 In this file photo, Indian and Pakistani border guards take part in the nightly ceremony at the Wagah border. PHOTO: AFP

India is set to launch ‘Des Punjab’- a state-run radio programme that will reach Pakistan’s airwaves on September 24.

The FM service will be transmitted from Indo-Pak border in Attari, Amritsar, Times of India reported on Sunday.

According to All India Radio (AIR), the programme is meant to ‘counter’ the audience of ‘Punjab Darbar’- a show operated by Radio Pakistan – being aired in India and Pakistan for the past three decades.

The Amritsar-based project will canvas a 90-kilometre radius with signal reception in Indian areas as well as Pakistani Punjab’s Sheikhupura, Muridke, Kasur, Nankana Sahib and Gujranwala.

While ‘Desh Punjab’ hasn’t been able to reach all of Pakistan due to unresolved technical issues, AIR has announced it will be upgrading the transmitter from its old amplitude modulated (AM) to frequency modulated (FM) technology.

Assistant director AIR Jalandhar Santosh Rishi told media the programme is being rewired to promote ‘quality programming’ and it will be featuring programmes which will celebrate Punjabi culture and literature. It will also feature a show called ‘Majhe di Mehak’ highlighting development by Indian government along the border.

This article originally appeared in Times of India