Yemen is in its worst humani­tarian crisis with an estima­ted 10,000 people killed and millio­ns at risk of starva­tion
By AFP
Published: September 22, 2018
Tweet Email 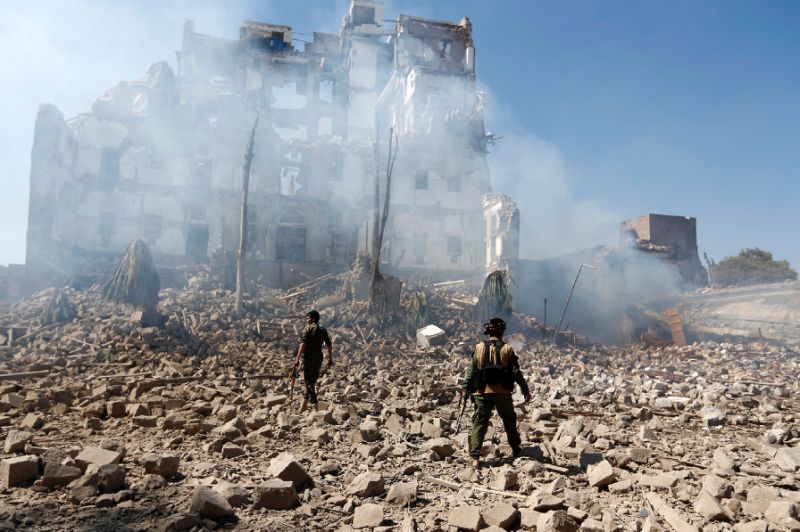 Huthi rebel fighters inspect the damage after a reported air strike by the Saudi-led coalition in Sanaa. PHOTO AFP

GENEVA: Saudi Arabia is trying shut down a UN-backed war crimes investigation in Yemen, Human Rights Watch said Friday, calling it a “blatant attempt to avoid scrutiny” of its conduct in the country.

The group’s allegations are backed by rival resolutions on Yemen proposed at the ongoing session of the United Nations Human Rights Council in Geneva.

A resolution led by a group of European countries and Canada calls for a one-year extension of the inquiry that last month reported evidence of possible war crimes by all sides in Yemen, including the Saudi-led coalition.

A second text, led by Tunisia on behalf of the group of Arab states, makes no mention of extending the probe but calls for Yemen’s often-criticised National Commission of Inquiry to continue studying the conflict.

US calls on Saudi-led coalition to probe Yemen attack

Saudi Arabi and its ally the United Arab Emirates are both members of the Arab group on the 47-member rights council.

“The Saudi-led coalition’s campaign to discredit and undermine a UN investigation into abuses by all Yemen’s warring parties is yet another blatant attempt to avoid scrutiny of the coalition’s own actions in Yemen,” John Fisher, HRW’s Geneva director, said in a statement.

“The Human Rights Council cannot afford to fail Yemeni civilians. States should renew the mandate of the (probe) or risk the Council’s credibility,” he added.

Diplomatic haggling over the rival texts is like to continue before the current rights council session closes next week.

The resolution that first set up the inquiry followed a years-long diplomatic fight. At the 11th hour, Saudi diplomats threatened economic retaliation against states that voted for the project.

Yemen has since descended into what the UN calls the world’s worst humanitarian crisis, with an estimated 10,000 people killed and millions at risk of starvation.

The coalition has been accused of bombing multiple civilian targets, including buses and hospitals.