Strict securi­ty arrang­ements have been put in place across Sindh
By Our Correspondents / Photo: Athar Khan
Published: September 21, 2018
Tweet Email 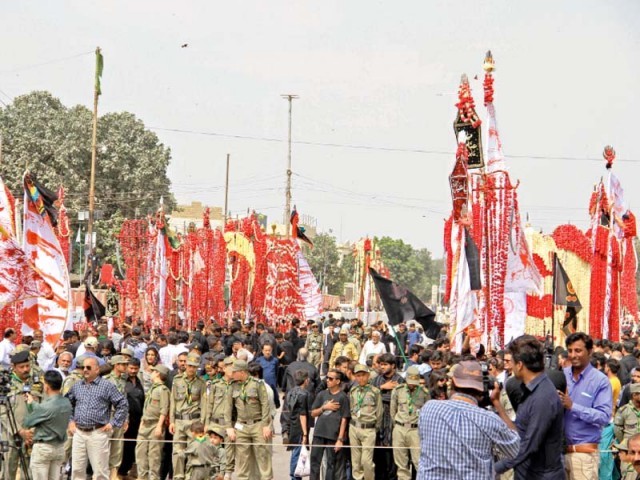 Thousands of mourners from across Karachi and Hyderabad paid homage to the martyrs of Karbala on Thursday. PHOTO: ATHAR KHAN/EXPRESS

KARACHI / HYDERABAD: Thousands of mourners from across Karachi paid homage to the martyrs of Karbala on Thursday. The main 9th Muharram procession, organised each year to pay tribute to the sacrifices rendered by Hazrat Imam Hussain and his companions more than 1,400 years ago, began at Nishtar Park and culminated at Imambargah Hussaniyan Iranian, Kharadar under tight security on Thursday evening.

A large number of men, women and children started to converge at Nishtar Park from early in the morning to attend the Majlis. They later joined the main procession that was escorted by Pak-Hyderi scouts and started moving around 11 am toward its destination.

The procession commenced after Majlis-i-Aza and passed through Numaish Chowrangi at MA Jinnah Road where the marchers offered Namaz-e-Zuhrain at Ali Raza Imambargah. From there, it took its traditional route — crossing Empress Market, Tibet Centre, Eidgah and Boulton Market to reach Kaharadar. All the roads and streets along the route of the procession were sealed with containers and barricades while shops on the main route were sealed shut.

Strict security measures were put in place for the main procession, with a heavy deployment of around 5,000 police personnel, besides personnel of Rangers and Pakistan Army performing security duties. Thousands of police personnel secured various other processions and Imambargahs in other parts of the city.

All high-rise buildings located along the route of the main procession were manned by cops, including snipers deployed on the rooftops to keep strict vigil so as to avert any untoward incident. Staying ahead of the procession, bomb disposal teams also cleared the areas where the mourners would march through. Surveillance was also conducted through closed-circuit television (CCTV) cameras. 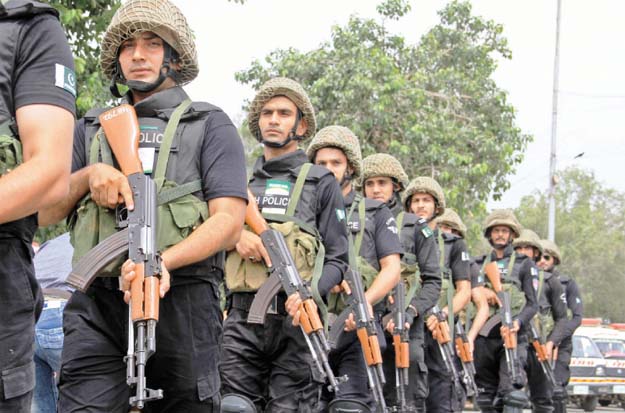 Measures such as a ban on pillion riding as well as the suspension of mobile phone services in the adjoining areas of processions were undertaken by authorities to avoid any untoward incidents.

Scouts organizations, rescue services and the city administration made necessary arrangements to facilitate the participants of the processions which will continue on Muharram 10 (today).

In case of any mishaps, the provincial health department and Karachi Metropolitan Corporation have declared an emergency at all public sector hospitals of Karachi and other parts of the province and have ordered the availability of doctors, paramedics and medicines.

Meanwhile, the traffic police have also issued alternative routes plan for commuters, following the blockage of MA Jinnah Road and its surrounding roads due to the Muharram processions.

Apart from the main procession at Numaish, several other traditional processions were held in the city in Ancholi, Korangi, Malir, New Karachi and Gulistan-e-Jauhar, among other areas.

Thousands of mourning processions will be taken out in the districts of Sindh to mourn the martyrdom of Hazrat Imam Hussain (RA) on Friday, Muharram 10, amid tight security. As many events of majalis will also be organised in the evening.

As many as 201 processions will take to the streets in Hyderabad. The central procession will start from Qadam Gah Moula Ali (RA) near Haider Chowk and culminate after marching over a kilometre at Karbala Dadan Shah near the police lines.

Up to 55 roads and streets intersecting the route will be sealed while the mourners can enter the procession through only one entry point near Bacha Khan chowk. The exit point will be located near the police lines.

Some 17 processions have been declared as very sensitive and 18 others as sensitive by the police. In the evening, 71 majalis will take place. More than 4,000 policemen and police commandos and 700 personnel of Rangers besides thousands of volunteers will perform security duty.

According to police spokesman, Mazharul Haq Shani, two control rooms have been set up at the offices of SSP and City SDPO to monitor the city with the help of CCTV cameras. He added that jamming devices will also be placed along the routes of the processions.

Meanwhile, in the five districts of Larkana division, 759 processions will be taken out, of which 90 have been classified as very sensitive and 283 sensitive. Larkana DIG Javed Akbar Riaz told the media that over 16,500 policemen are being deployed in the five districts in addition to the Rangers personnel and volunteers. According to him, a central control room will be set up at his office besides the district-based control rooms in the offices of the respective SSPs.