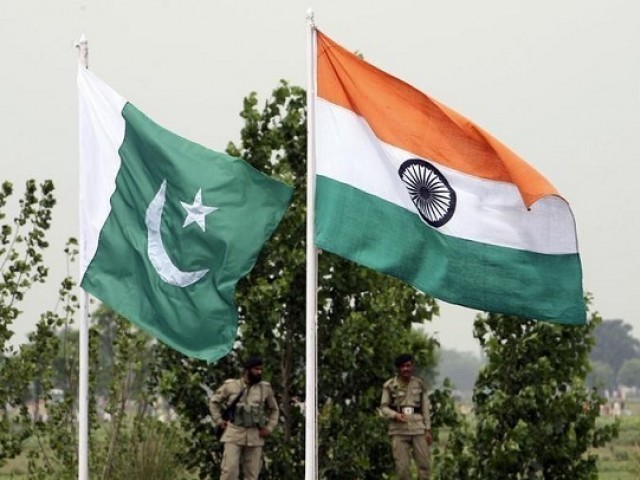 Pakistani rangers stand near the Indian and Pakistani national flags during an annual fair near Pakistan border in Chamliyal. PHOTO:REUTERS

ISLAMABAD .: Foreign ministers of Pakistan and India are set to meet on the sidelines of the UN General Assembly session in New York next week in a move that renewed hopes of de-escalation in the lingering tensions between the two nuclear-armed neighbours.

The meeting between the foreign ministers, first in almost three years, is taking place at the request of Prime Minister Imran Khan.

The Indian External Affairs Ministry on Thursday confirmed at a news briefing in New Delhi that Indian had accepted the proposal of the Pakistani prime minister for a meeting between the two foreign ministers.

However, Spokesperson Raveesh Kumar added that “it’s a meeting, not a resumption of dialogue”.

He also said the agenda of the meeting had not yet been finalised.
“This is just a meeting; too much should not be read into the proposed meeting,” Kumar said.

“This is not resumption of dialogue. They asked for a meeting, we said yes.”

Imran on September 14 wrote a letter to his Indian counterpart offering him an olive branch to resume the dialogue between the two countries on all issues — including Kashmir and terrorism.

In the letter addressing the prime minister as “Modi Sahab”, Imran Khan also suggested a meeting between the foreign ministers and said Pakistan “remains ready” to discuss terrorism.

He further said that the foreign ministers could explore the way forward, adding that the Saarc Summit in Islamabad “will offer an opportunity for you to visit Pakistan and for us to re-start the stalled dialogue process”.

Foreign Office Spokesperson Dr Muhammad Faisal said the premier had responded to Modi in a “positive manner” and urged the Indian government to talk and resolve all issues.

While India agreed to a meeting between the two foreign ministers, it did not accept Prime Minister Imran’s proposal for holding of the Saarc summit in Pakistan that was originally to take place in November 2016.

India foreign ministry spokesperson while turning down the proposal for a Saarc summit in Pakistan, claimed the atmosphere was not conducive.

Nevertheless, the meeting between the foreign ministers could provide an opportunity to the two sides to explore options for some kind of engagement.

Relations between the two countries have been tense for years, with India accusing Pakistan of not doing enough to stop what it alleges cross-border terrorism.

Islamabad, however, always denies the charges and insists that the only way forward is to seek a solution to the problems through dialogue.

The recent geo-strategic environment has also complicated their already troubled relationship. With India’s growing tilt towards the US and Pakistan’s closeness with China, the trust deficit between Islamabad and New Delhi is also growing.

Observers are sceptical if the two countries will be able to resume full spectrum of dialogue given the parliamentary elections in India next year.

In pictures: Muslims observe Muharram across the world