Pakistan does not wish to be aid-dependent: Haqqani

Pakistan does not wish to be aid-dependent: Haqqani 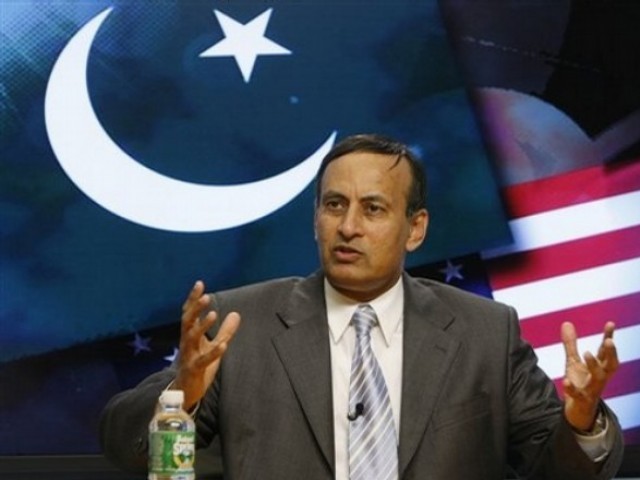 WASHINGTON: Pakistan has no desire to depend on foreign assistance forever but seeks greater trade for its sustainable development, and US providing easy access for the country’s products would both spur economic progress and serve common security interests, Islamabad’s envoy to the United States said.

Ambassador Hussain Haqqani also asked Pakistan’s critics not to confine their discourse to aid results but view the important US-Pakistan relationship in a holistic perspective.

“If the United States opens its market for Pakistan more, it would be a much better way of helping Pakistan,” Haqqani stated, explaining that job creation through greater economic activity would foil extremists’ designs to exploit the unemployed youth.

US assistance should be seen part of a broader partnership, he argued, addressing a gathering of experts at the launch of a report “Beyond Bullets and Bombs: Fixing the US Approach to Development in Pakistan” which was released by Center for Global Development on Wednesday. He said change in Pakistan will come from within.

The Pakistani diplomat noted that an aid-centered approach creates political problems. “The role of aid should be that of catalyst for us to accomplish that change on our own. Aid it is not going to be the main basis on which Pakistan will find prosperity, our prosperity will come from Pakistanis unleashing their potential in trade, opening up of Pakistan to investment and making it possible for our neighboring countries to trade with us,” he remarked.

Pakistan, Haqqani said, appreciates the US assistance and understands that the American taxpayers should know about transparency and accountability in its use but took issue with the notion that each there is an issue between the two nations; the knee-jerk reaction on the Capitol Hill should be threats to cut off aid.

“Pakistan is a nation of 180 million people, it has a lot of diversity and there are problems too. Discussion on Pakistan-US relations should not be aid-centered but on partnership.”

Haqqani welcomed the recommendation that development assistance should be separated from security issues.

“There is no begging bowl. Pakistan and the United States are partners, trying to help each other.”

The ambassador also asked critics to resist the short-sighted tendency to measure outcome of aid in a simplistic manner, by judging results from just a short period. Assistance yields full results upon completion of projects, which is a multi-year process, he pointed out.

In this respect, the ambassador cited the example of a popular Pakistani orange and said its seeds were first provided by the United States way back and now it is a successful fruit of partnership that provided unconditional aid without any noise.

Similarly, he added, US assistance helped establish some of the very successful institutions of higher learning like Lahore University of Management Sciences and Karachi’s Institute of Business Administration.

He said Pakistan should determine its development priorities and also told the gathering that non-governmental organizations cannot supplant the government in any country.

“Pakistan does not wish to be an aid-dependant country. At the same time, we do not want the aid to be the focus of our partnership. Pakistan and the United States are working hand in hand to plan US assistance program.”