From white-hot frocks and sexy pantsu­its to sartor­ial statem­ents that were politi­cal too - Emmys 2018 had it all
By AFP
Published: September 18, 2018
Tweet Email 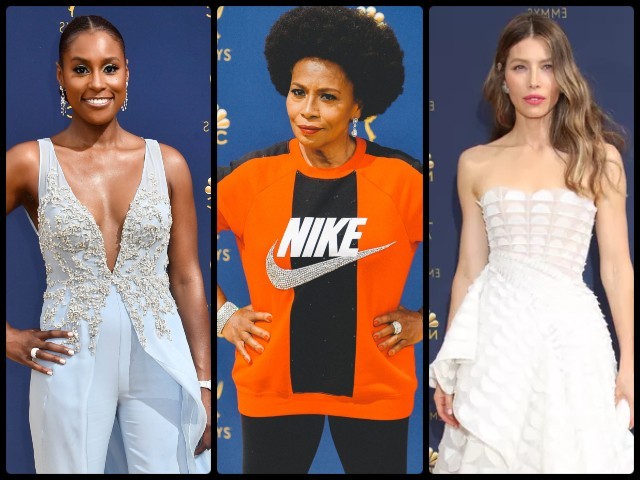 LOS ANGELES: Under a bright California sun, Tinseltown’s A-listers sparkled on the Emmys red carpet on Monday in sultry satin dresses, eye-catching beaded gowns, and even a few pairs of sneakers as they gathered to honour the best in television.

From white-hot frocks and sexy pantsuits to sartorial statements that were political too, the following is a look at the styles and trends making waves at the Microsoft Theater in downtown Los Angeles. 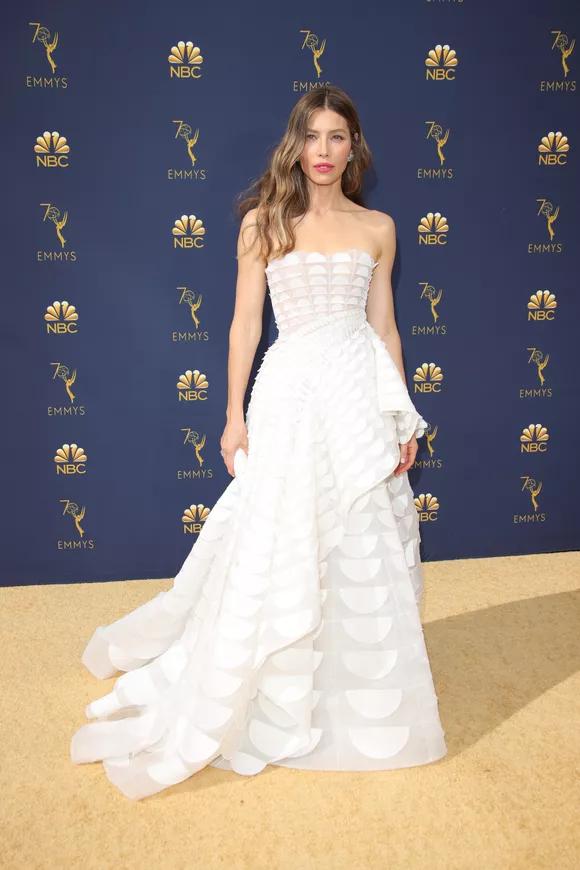 Once upon a time, US fashion mavens said wearing white after Labour Day in early September was a definite no-no. But on a summery afternoon in the City of Angels, with the mercury hitting 28 Celsius, white gowns were white-hot. 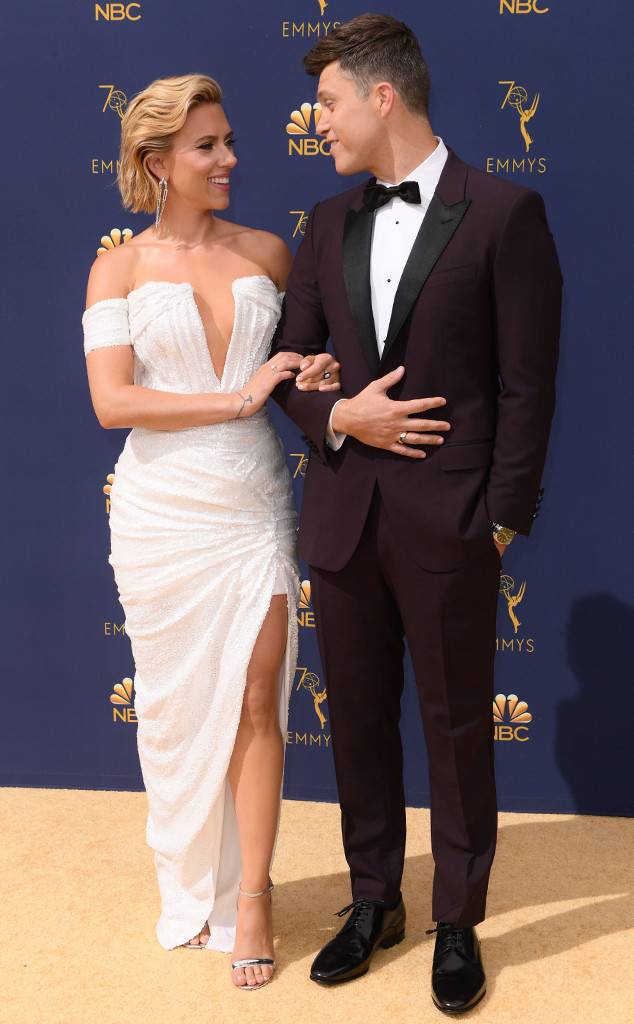 Scarlett Johansson oozed sensuality in a white gown at the Emmys on the arm of her boyfriend, host Colin Jost. She wore a sizzling, sculptural strapless Balmain gown with a plunging V neckline and a daring slit. 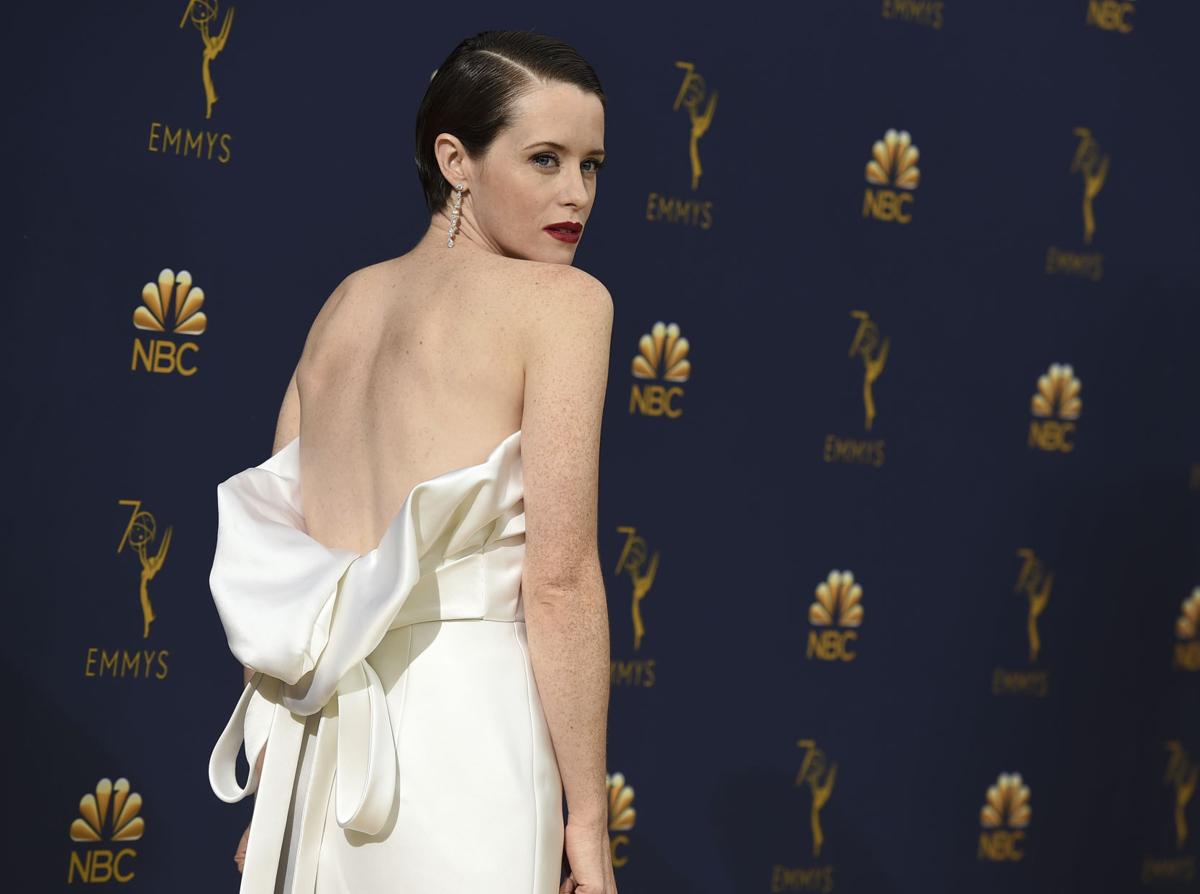 Claire Foy, the Emmy winner for best actress in a drama for her portrayal of Queen Elizabeth II in The Crown, looked polished in a strapless Calvin Klein gown with a giant bow in the back. 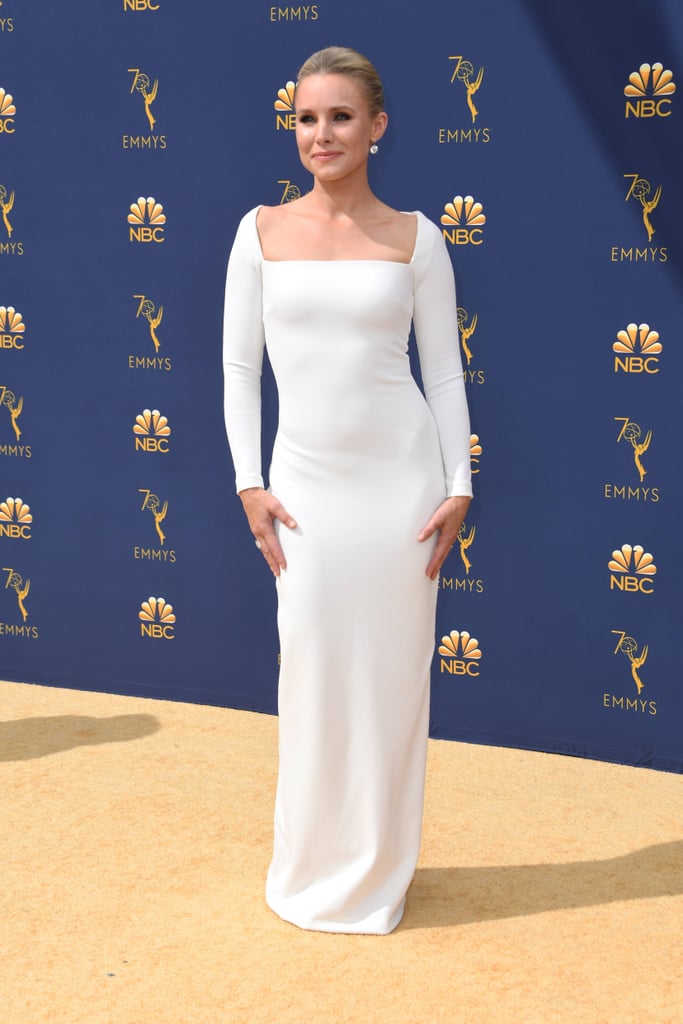 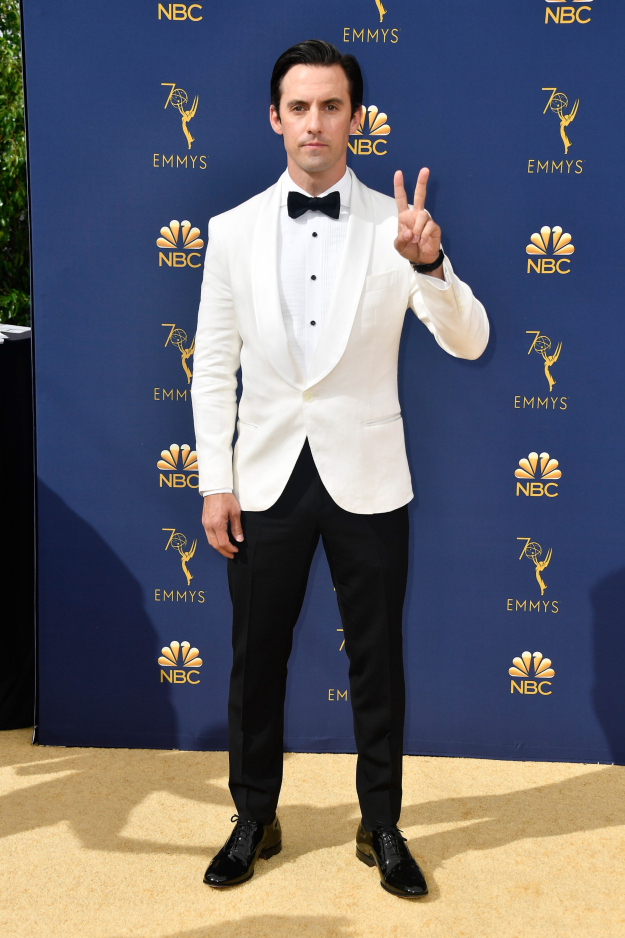 For the guys, This Is Us star Milo Ventimiglia – minus the mustache his character Jack Pearson is known for – and Atlanta star Lakeith Stanfield went with old-school white dinner jackets. 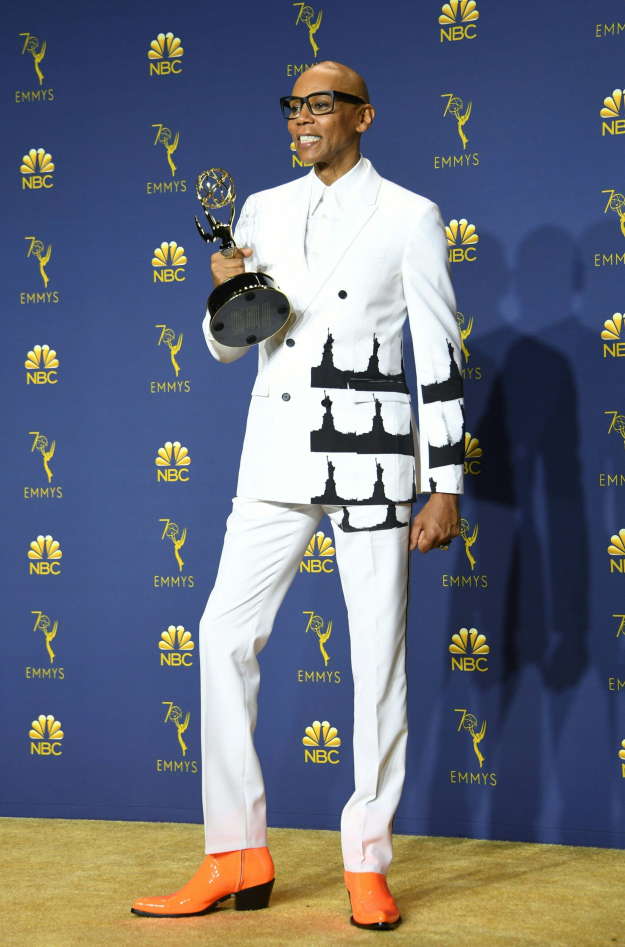 And RuPaul – already a winner for best reality show host for RuPaul’s Drag Race – rocked a killer double-breasted Calvin Klein white suit with the Statue of Liberty emblazoned in a black pattern on the jacket.

During the last awards season, Westworld star Evan Rachel Wood wore trouser suits to every event to make a statement. At the Emmys, Wood did the same, and her fellow actresses followed her example. 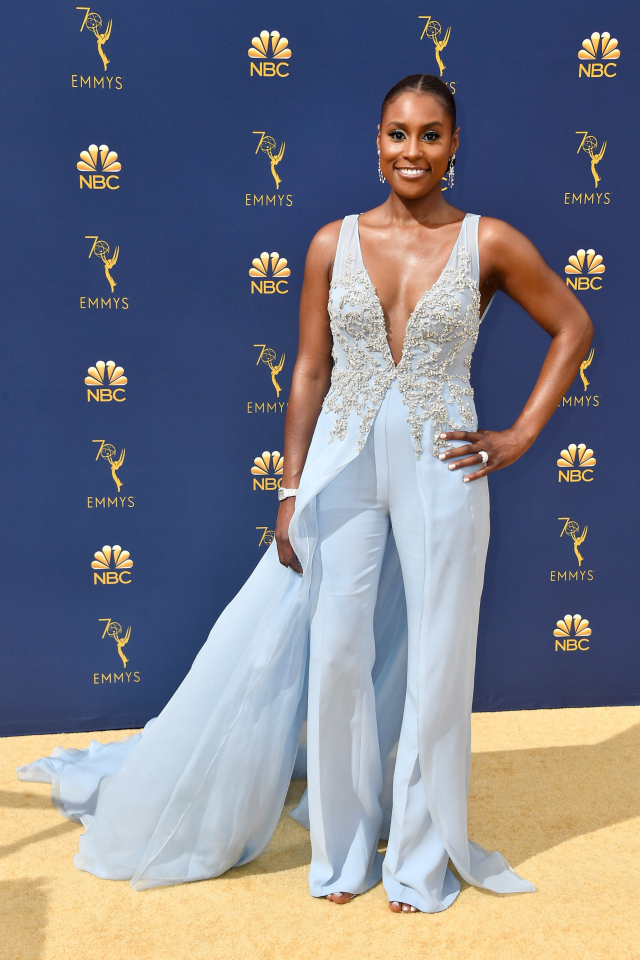 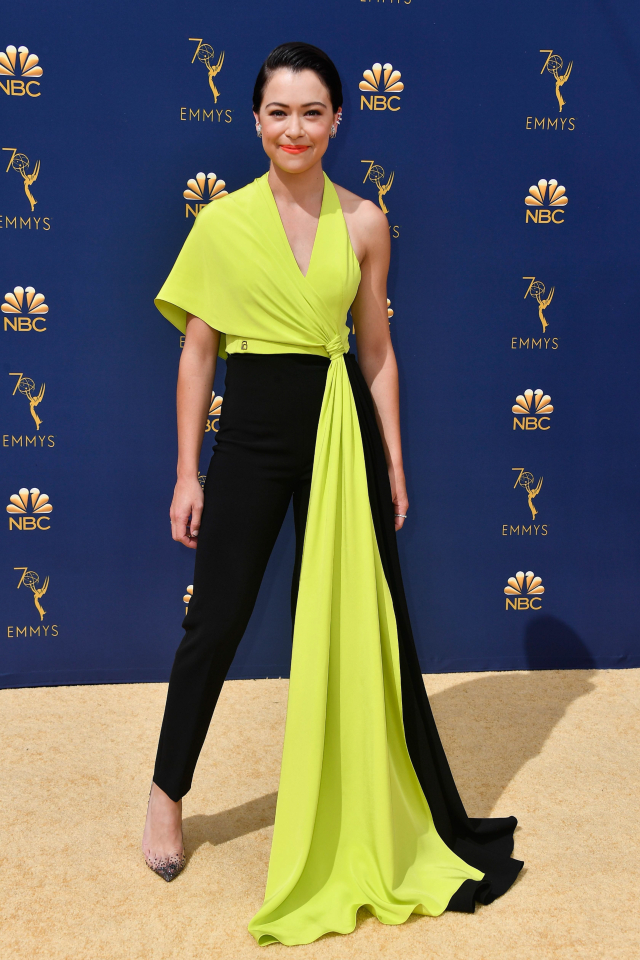 Tatiana Maslany, who is nominated for lead actress in a drama for Black Orphan, wore a daring Christian Siriano ensemble, with a chartreuse one-shoulder top and black pants. 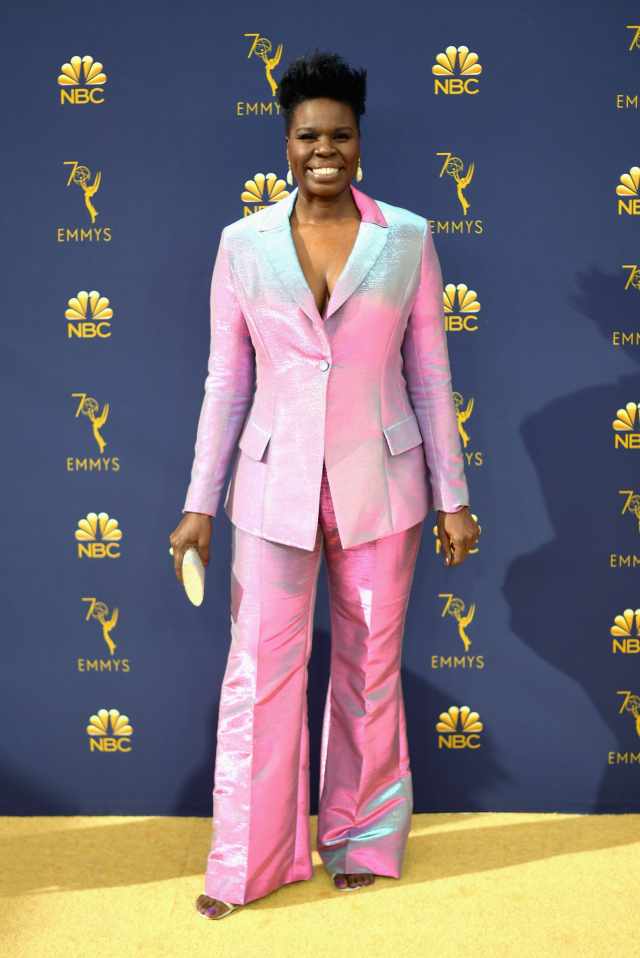 And Saturday Night Live star Leslie Jones – an Emmy nominee and presenter – slayed in an iridescent pink and blue suit, also from Siriano.

The future’s so bright…

In Los Angeles, sunglasses are de rigueur, so it’s no surprise they were the must-have red carpet accessory. 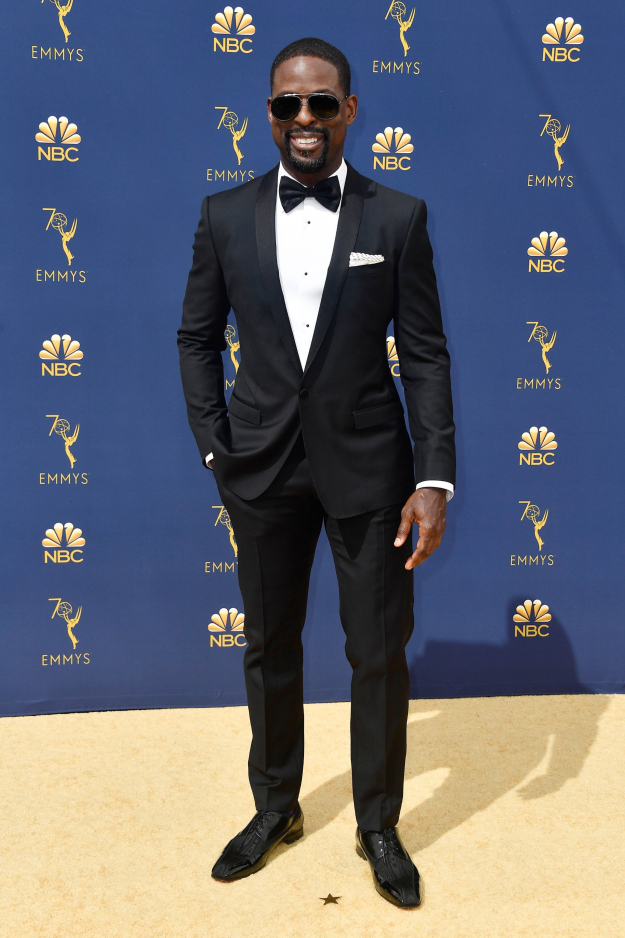 This Is Us star Sterling K Brown was the epitome of cool in a traditional Dolce and Gabbana tuxedo and dark sunglasses. 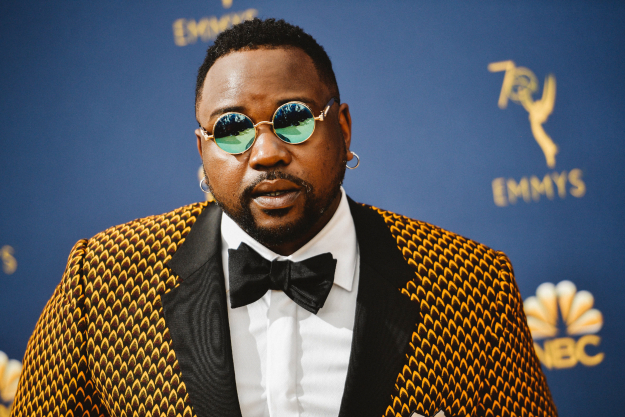 Brian Tyree Henry, a nominee for best supporting actor in a comedy for Atlanta, paired mirrored blue round glasses with his snappy orange chevron-patterned jacket.

Hollywood red carpets have been criticised in recent years for turning into vapid affairs, especially in the wake of the Time’s Up and #MeToo movements. At the Emmys, the stars were asked deeper questions – but some didn’t need to be asked. 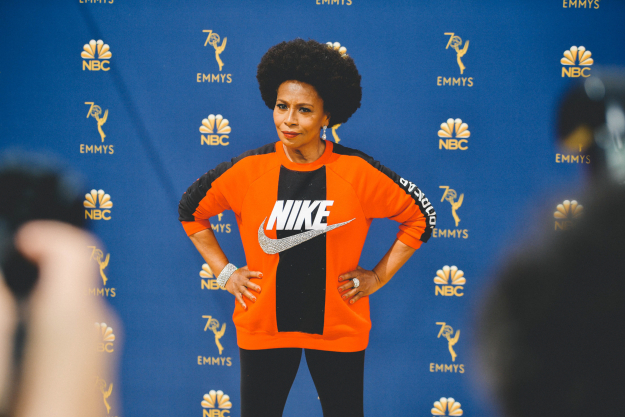 Veteran actress Jenifer Lewis, who stars on ABC’s nominated comedy black-ish, let the clothes do the talking. She wore a custom Nike sweater with a sparkling swoosh in support of former San Francisco 49ers quarterback Colin Kaepernick. “I am wearing Nike to applaud them for supporting Colin Kaepernick and his protest against racial injustice and police brutality,” she told Hollywood news outlet Variety.

Kaepernick, who was effectively blacklisted by the National Football League after kneeling during the US national anthem in 2016 in solidarity with the ‘Black Lives Matter’ movement, is featured in Nike’s latest ad campaign.