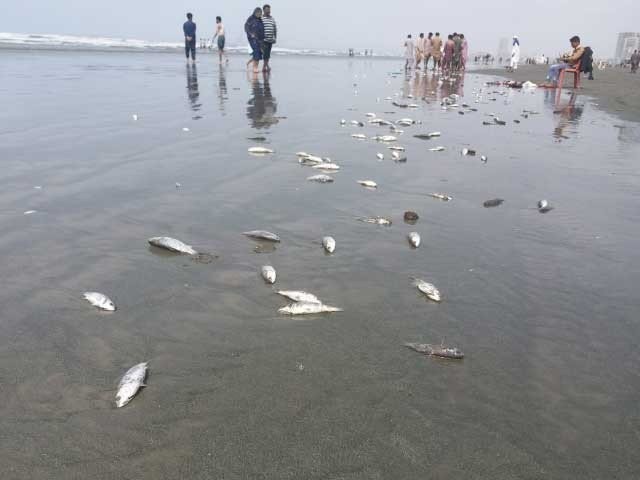 The death the of marine life is a cause for concern for local fishermen who are dependent on them for their sustenance. PHOTO: EXPRESS

A large number of dead sea creatures surfaced along Karachi’s Sea View beach with experts believing that they have died owing to an illness or oil spill, Express News reported on Sunday

The death the of marine life is a cause for concern for local fishermen who are dependent on them for their sustenance.

Citizens say that that the maritime movement of ships to Karachi’s ports and shore, along with poisonous chemical waste and diesel is a major reason behind the incident.

The authorities, however, are yet to take any action against the factories for polluting the waters.

Experts believe that incidents such as this occur every year as the local authorities have installed a sewage line in the sea.

Moreover, the disposal of waste into the sea is also a contributing factor in the loss of marine life.

Yesterday, volunteers belonging to different organisations participated in a beach clean up to observe the International Coastal Clean-up Day.

A beach clean-up activity, organised by the World Wide Fund for Nature – Pakistan in partnership with the National Volunteer Programme (NVP) and a beverage company, was conducted at the Sea View beach. The activity aimed to create awareness and a need to check the increasing pollution of the world’s seas and oceans.