404,475 cases reported this year at Sindh’s only skin hospital

404,475 cases reported this year at Sindh’s only skin hospital 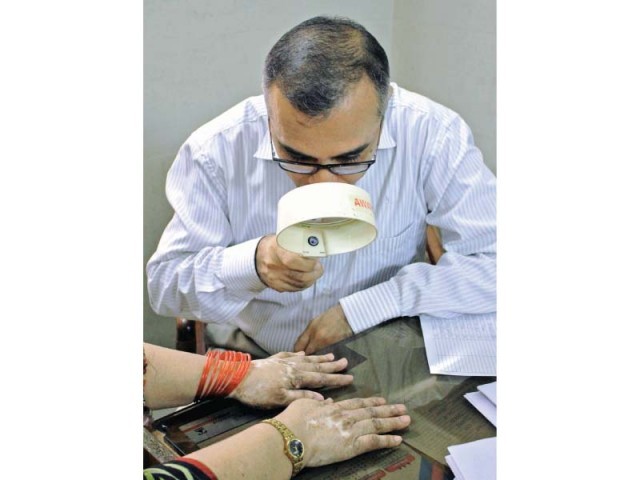 The highest number of patients was reported in July when 74,050 patients flocked to the hospital for treatment of skin-related diseases. PHOTO: ATHAR KHAN/ EXPRESS

KARACHI: There was a time Humera, a student of class seven at a government school in Landhi, couldn’t even open her eyes when she woke up in the morning. She is suffering from a condition commonly known as skin tuberculosis

With a look of satisfaction, her father shows a consultant at the Institute of Skin Diseases, Sindh the stack of prescriptions and tests conducted on Humera over the past 10 months. And now after two months, he is relieved because she is recovering after taking medicines prescribed by the doctors at the institute.

Humera suffers from a disease which is essentially an invasion of the skin by a particular bacterium. “She [Humera] has now recovered more than 50%,” shared her father, Shafiq Ahmed.

Another patient, Daad Khan, was consulting with a senior medical officer at the hospital, Dr Syed Irfan Ahmed, in a separate examination room. After examining the patient, the doctor diagnosed Khan with scabies and skin fungus for which he was prescribed handmade formulae made at the hospital. The medication was available at the hospital free of charge.

Dr Irfan told The Express Tribune that skin fungus has become an endemic, adding that 50% of the cases received at the hospital come with similar complaints. “It’s a contagious disease with an expensive treatment and causes discomfort due to itching and burning in the affected areas.”

However, he explained, “Not every skin disease is contagious and people should not outcast those suffering from one as it brings negative social implications for them in society.”

Located at the famous Regal Chowk, the only specialised hospital in the province dedicated to the treatment of skin diseases is commonly known as ‘Chamra hospital’. It is flocked by more than 3,000 patients in a single day, who are mainly affected due to smoke inhalation, pollution and unhygienic environmental conditions.

In the first seven months of this year, 404,475 cases of skin diseases were reported at the institute, out of which 209,740 were of skin fungus.

The highest number of patients was reported in July when 74,050 patients flocked to the hospital for treatment of skin-related diseases.

According to the data provided by the institute, 16,165 procedures were carried out, including electric and chemical cautery, carbolic acid touch and cryotherapy to treat moles, warts and skin tags.

The hospital started in 1952 and 60 doctors and 12 consultants currently render their services. It houses 18 examination rooms, out of which eight are dedicated for women patients.

Dr Soomro said that free of charge medicine provided to the patients, which is generally expensive in the market, is one of the main attractions for patients. However, he complained that non-compliance by patients of the prescribed dose has remained a serious issue since the disease reoccurs with stronger symptoms.

According to the institute’s director, the natural skin tone of every person is unique and must not be tampered with.“We should not try to spoil the tone of our real skin colour as dark skin tone has its own benefits or else it can lead to rampant skin cancer due to harsh and direct sun rays,” he advised.

He added that whitening creams come with major side effects and must be used cautiously.

He appealed to the people to consume lots of fruits and vegetables and take care of their hygiene to stay away from skin diseases and not fall pray to quacks if they develop any skin related issue.

Left in the lurch: Relief efforts for drought-affected people yet to begin