Says he has instru­cted NAB to not humili­ate anyone under invest­igatio­n
By Danish Hussain
Published: September 14, 2018
Tweet Email 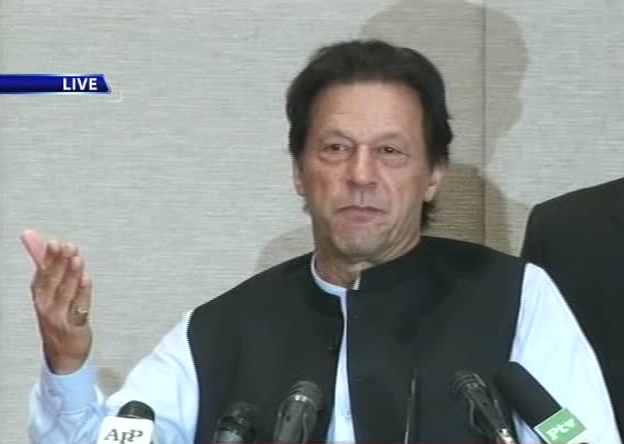 ISLAMABAD: Exhorting civil servants to support the government in implementing its ambitious reforms, Prime Minister Imran Khan on Friday said ‘liberating them from political interference’ would be the government’s foremost priority.

Assuring bureaucrats of keeping to the highest norms of merit in promotions, he said that protection of bureaucrats’ service tenures, an end to humiliation during the accountability process, and enhanced pay and incentive packages were necessary for maintaining their dignity.

He was addressing a gathering of civil servants at the Prime Minister’s Office here.

PM Khan also said he did not care about any civil servant’s political affiliation, adding that in the end, the only thing that mattered from now on was performance.

“I am not concerned if you like PTI and Imran Khan or any other political party. I am only concerned about your performance. If you work in a dedicated manner, I will stand by you irrespective of your political affiliations,” the PM maintained.

Stressing the need for overcoming grave challenges confronting the country, Imran said that from now on, the government would adopt an ‘out-of-the-box’ approach.

He said that if bureaucrats failed to enforce tough decisions as they were expected to do so, the government’s efforts to streamline governance would remain futile.

“Pakistan is in dire need of your services today than ever,” he said.

He said that civil servants were more aware of grave challenges confronting Pakistan on the economic front.

“The country is genuinely at a crossroads. We have plunged deeper into the classic debt trap. The government can only get out of this situation if the bureaucracy actively supports its efforts,” PM said.

“We have the highest rate of unemployment (rate in the region). In the past, we borrowed money and invested it in projects which are overburdening the national economy.”

Stressing the need for the country’s elite, especially bureaucrats, to change their mindsets, he said: “Our elite class (still) has the same mindset as (was in vogue during the) British colonial era. That system was meant to rule the subjects. Since the time of our independence, our elite refused to dismantle this mindset,” he said.

Highlighting the need for abandoning the colonial era mindset, he said this was necessary to ensure a better future for the country.

“Over the past 70 years, we have even failed to develop a uniform education system. This was because our elite failed to abandon the colonial era mindset,” he said.

Citing Darwin’s Theory of Evolution, he said that the country needed to embrace change, adding that it was necessary for survival.

Urging the bureaucrats to be cautious while spending the public money, the PM said that before unnecessarily spending even a rupee, bureaucrats should keep in mind that in this country, women died while giving births because of the absence of basic healthcare facilities, growth of 43 per cent of children in the country was stunted and 25 million children were out of school.

Accountability, he said, was the cornerstone of this government “because corruption has caused an immense loss to Pakistan”.

Khan pointed out that during a recent meeting with the Chairman NAB, he had asked him not to humiliate civil servants while conducting inquiries against them.

He said that his government was planning to bring reforms in the civil service sector in a bid to restore Pakistan civil service’s lost glory.

He said that as a matter of routine, all nations face ups and downs and the country’s ongoing ‘down cycle’ would not last forever.

“All it needs is proper direction.”

“If we manage to rectify our governance system, no one can stop Pakistan from prospering. Due to bad governance, no one is ready to invest in Pakistan,” he said.

Pakistan, he said, could have “more than enough money within two years, provided we streamline our governance system”.