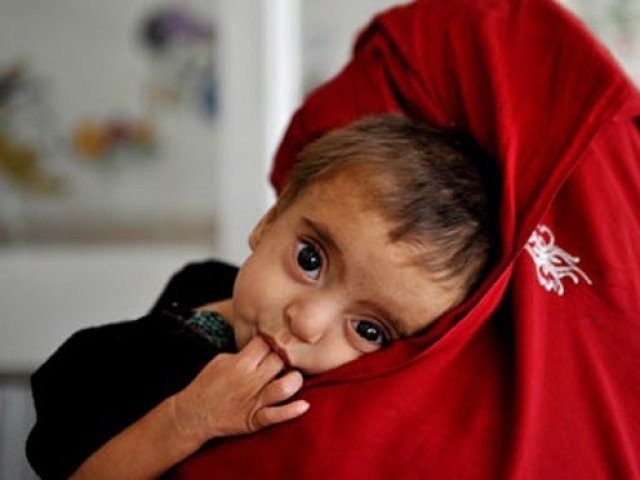 As much as 78% of the children get below optimal dietary diversity. PHOTO: AFP/ FILE

ISLAMABAD: Only 15 per cent of children in Pakistan aged between six and 23 months are being fed minimally acceptable diet necessary for effective growth, a new government study states.

The study, titled National Complementary Feeding Assessment, was launched by the Ministry of National Health Services, Regulation and Coordination here on Wednesday.

As much as 78 per cent of the children had below optimal dietary diversity, and several nutrient-rich food groups are rarely consumed by infants under two years of age because of poverty and limited access to health and nutrition services.

The diet of children in this age group routinely lacks eggs, meat, vitamin A and iron-rich foods, while locally-available foods were mainly deficient of vitamin B12, vitamin A, calcium and iron.

Inappropriate complementary feeding practices, along with breast or formula milk for children aged between six and 23 months, were a major cause of malnutrition and stunting, the study stated.

The assessment provides an in-depth analysis on the feeding practices, related barriers and boosters as well as guidance for improving these practices for children aged between six and 23 months.

According to the assessment, as much as 63 per cent of children in this age group received the minimum recommended number of meals per day and breastfeeding while 22 per cent had access to four of seven WHO-recommended food groups.

Just 15 per cent of the children in this age group received adequate number of meals with at least four necessary food groups.

Pakistani children, the report indicated, mostly consumed grains, roots, and tubers (81 per cent) while the consumption of legumes and nuts was lowest (six per cent). The consumption of dairy products was 60 per cent, vitamin A-rich foods 19 per cent, eggs 25 per cent and any kind of meat 18 per cent.

Consumption of foods rich in Vitamin A and iron was lower in stunted and underweight children, it stated.

Consumption of unhealthy packaged items and chips was also very common because parents thought them to be of nutritional value.

The study also found that the consumption of seven food groups increased with the increase in wealth quintiles.

Roundtable on nutrition: Rs10b funds to end stunting in children

It also found that dietary habits restricted the consumption of some nutritionally-rich and less expensive foods such as Maithi (fenugreek), Bajra (millet) and Jawar (sorghum).