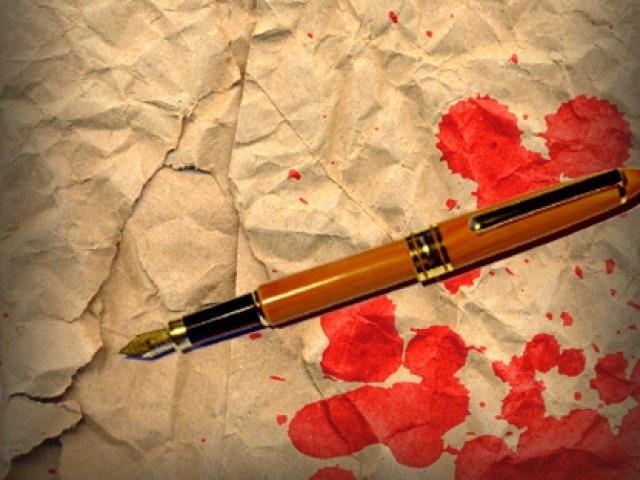 MULTAN: Three suspects, including a woman, were arrested from Multan on Tuesday after Mohammad Saeed Butt – a senior Journalist of an Urdu daily (Khabrain) and former president of press club, was shot dead by two unidentified armed men at a shop in Khanewal district’s Abdul Hakeem town last night.

Police said Saeed Butt, 48, was sitting at a shop in main market of Abdul Hakeem, a sub-district of Khanewal district, when two masked men, suspected to be robbers, barged into the shop and demanded money from the deceased.

According to eye witnesses’ account, Butt handed over his wallet but dacoits demanded more money and on his refusal opened fire at him. The suspects fled away after the incident.

In the line of duty: journalist tortured by hospital guards

The journalist succumbed to his wounds on the way to DHQ Kabirwala. His body was later handed over to his loved ones after the postmortem.

Saad Butt, son of the deceased journalist told The Express Tribune that his father had been receiving threatening phone calls for reporting incidents of honour killing for the past one month. He claimed that his father was murdered for performing his duty with honesty.

Police said the suspects were arrested from Multan with the help of CCTV footage after a first information report (FIR) of the incident was lodged at Abdul Hakeem police station. They further claimed that weapons used in the murder were also recovered and the suspects have confessed their crime. Further investigation would be carried out after forensic tests, they added.

The journalist fraternity condemned the killing and demanded Chief Justice of Pakistan Mian Saqib Nisar to take suo motu notice over escalating killing of journalists in the country. They termed the incident an act of terrorism and failure of Punjab government to provide security to the community.

Funeral prayers of the deceased journalist were offered by renowned religious scholar Maulana Tariq Jameel at the railway ground in Abdul Hakeem earlier today. A large number of journalists, members of civil society and people belonging to all walks of life attended the funeral. On the directives of Punjab Chief Minister Usman Buzdar, Kabirwala Assistant Commissioner Chauhdry Abdul Ghaffar was also present.