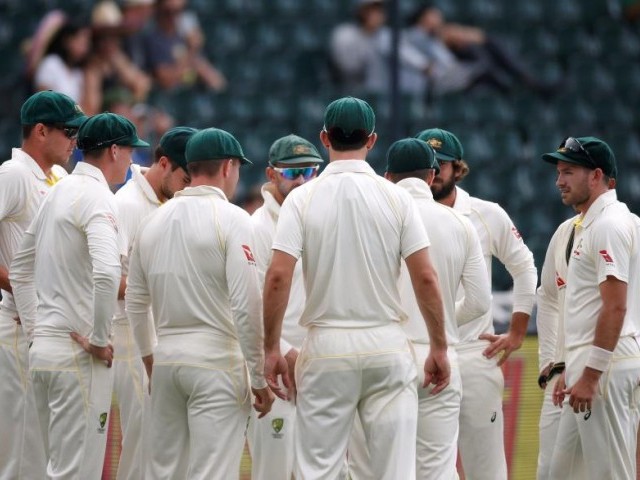 SYDNEY: Australia ushered in a fresh era Tuesday by including five uncapped players in their first Test squad since the scandal-plagued tour of South Africa this year.

With the disgraced Steve Smith, David Warner and Cameron Bancroft all suspended for their role in the ball-tampering row that sparked one of the worst crises cricket has faced, selectors had slim pickings.

For Pakistan Tests: Problems aplenty for Australia after A team failure in India

Also missing for their two-Test series against Pakistan in the United Arab Emirates next month are injured fast bowlers Josh Hazlewood and Pat Cummins, leaving Australia with one of its weakest Test squads in years.

“There has been significant change to our Test squad, due to the unavailability of a number of key players,” said national selector Trevor Hohns. “That said, we firmly believe the squad selected is up to the challenge ahead, and is capable of playing a brand of cricket that can perform well in this series against Pakistan.”

He added: “It’s a blend of experienced players who have a significant amount of either Test or first-class cricket, and a number of younger players who we are confident are ready for the Test arena.”

Three top-order spots were left vacant by Smith, Warner and Bancroft’s absence and opener Matt Renshaw, who was dumped ahead of the Ashes late last year but returned for the final Test in South Africa, fills one of them after a standout Sheffield Shield season.

The aggressive Finch, better known for his exploits in the shorter form of the game, was also included and could open the batting with Renshaw.

In a relief for selectors the experienced Shaun Marsh was declared fit after recovering from a shoulder injury that forced him to return home in July from a county cricket stint with Glamorgan.

A slimmed-down Usman Khawaja, all-rounder Mitch Marsh and either Head or Labuschagne should fill out the middle-order planks.

Peter Handscomb missed out after poor form on the current Australia A tour of India, and there was no room for batting all-rounder Glenn Maxwell, despite also offering a handy off-spin option.

Veteran Mitchell Starc will spearhead the attack and there was a recall for workhorse quick Peter Siddle on the back of his red-hot form in England this year with Essex, with either Neser or Doggett potential new-ball partners for Starc.