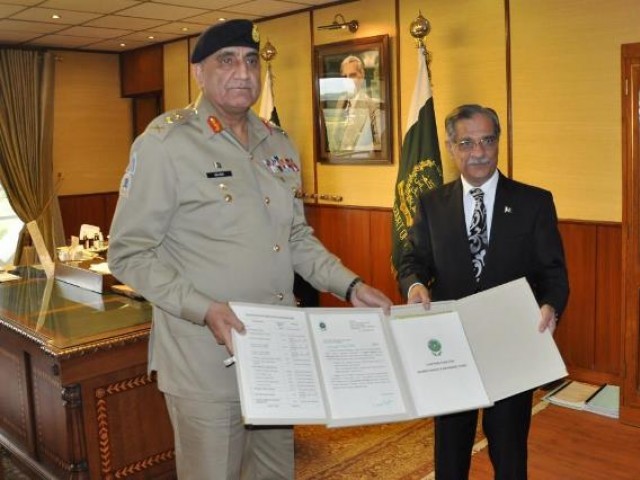 ISLAMABAD: Chief of Army Staff (COAS) General Qamar Javed Bajwa on Monday handed over a cheque of more than one billion rupees to Chief Justice of Pakistan (CJP) Mian Saqib Nisar in the Supreme Court’s Fund for Diamer-Bhasha and Mohmand Dam.

The army chief also handed a letter to the CJP, stating that officers of the Pakistan Army, including civilian staffers, had donated their two-day salaries, while junior commissioned officers (JCOs) and army’s civilian workforce had donated a day’s salary to the dam fund.

According to the letter, welfare originations linked with Pakistan Army have also made voluntary contribution to the cause.

“In sum, I am pleased to intimate that an accumulated amount of over a billion rupees has been collected and deposited in the Supreme Court’s Diamer-Bhasha and Mohmand Dam Fund,” states the letter.

The legal fraternity, especially lawyers, welcomed the meeting between the COAS and the CJP.

Pakistan Bar Council (PBC) Vice Chairman Kamran Murtaza said the meeting was a good omen, adding that it was rare that key state institution, including the judiciary, the executive, and the army, were aligned on other critical issues too, such as water shortage.
Murtaza said that opposition parties should also be involved in accelerating the campaign.

Appreciating the consensus on the issue of water shortage, Barrister Asad Rahim Khan said, “Such financial contributions [should serve as] a motivating factor for a much broader approach. It is vital that the [previous] government’s national water policy be pulled out of the cold storage. It is also necessary to raise public awareness on [water] conservation. Partisan considerations should not hamper [the] national effort.”

However, one section of lawyers is raising objections to the manner in which funds were being collected for the initiative. They believe that this is violating the ‘trichotomy of power’.

Secretary Law and Justice Commission of Pakistan Raheem Awan told The Express Tribune that although overseas Pakistanis were “very enthusiastic about donating to the fund”, they were unable to do so because of various reasons, one of them being a very few branches of Pakistani banks in foreign countries. There were other technical issues too, he added.

However, CJP Justice Mian Saqib Nisar had already instructed the State Bank of Pakistan (SBP) to take steps to tackle such issues, enabling Pakistanis living abroad to send donations easily. There are also indications that the CJP might go abroad to collect funds for the two dams.

The Law and Justice Commission of Pakistan also plans to organise an international conference on the water issue later this month.

The apex court has also sought legal assistance from renowned lawyers such as Makhdoom Ali Khan and Salman Aslam Butt to suggest ways and means for water management.

PM meets WAPDA chief, stresses need of the hour is to build dams