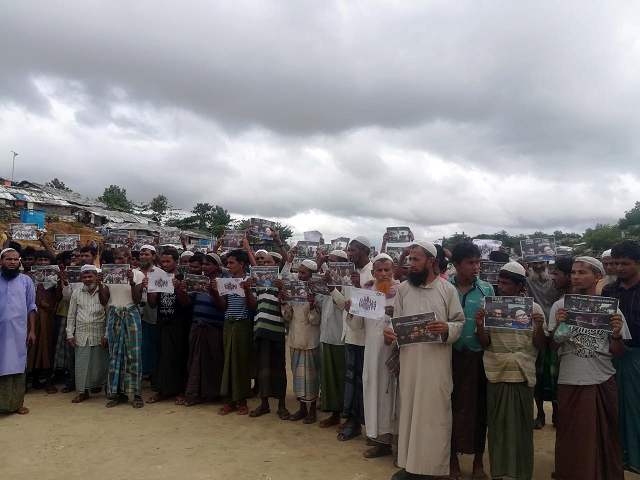 COX’S BAZAR, BANGLADESH: About 50 Rohingya Muslim refugees gathered in a muddy sports field in a camp in Bangladesh on Wednesday to protest against the conviction in Myanmar of two Reuters reporters, who were arrested while covering the plight of their community.

A Myanmar judge on Monday found the two journalists guilty of breaching a law on state secrets and jailed them for seven years, in a landmark case seen as a test of progress towards democracy in the Southeast Asian country.

The two reporters, Wa Lone, 32, and Kyaw Soe Oo, 28, were investigating the killing by the Myanmar security forces of Rohingya villagers at the time of their arrest in December.

The pair had pleaded not guilty.

More than 700,000 stateless Rohingya Muslims fled from the west of mostly Buddhist Myanmar into Bangladesh from August last year when Rohingya insurgent attacks on the Myanmar security forces triggered a sweeping military crackdown.

Abdu Shakur, the father of Rashid Ahmed, one of the 10 men whose deaths at the hands of the Myanmar military were exposed by the Reuters reporters, was among the crowd protesting in a refugee camp in southeast Bangladesh.

“Why were they sentenced?”

“I hope that if we all try for them then the government will release,” Shakur said.

After the two reporters were arrested, the military confirmed that the massacre they were investigating, of 10 Rohingya in the village of Inn Din in Rakhine State, had taken place and several soldiers were prosecuted and punished.

Though the Myanmar military acknowledged the killings at Inn Din, the government has denied most allegations of atrocities against Rohingya by the security forces.

It says it conducted a legitimate counterinsurgency operation against Muslim militants who started the violence.

Rahama Khatun, the widow of another of the men killed in Inn Din, was also at the protest.

“Our family members have passed away, also these two Buddhists were jailed,” she said, clutching a sign that read ‘Release Wa Lone and Kyaw Soe Oo’.

“Their families may be facing difficulties to survive. We have sympathy with their families.”