Fate of Syria's Idlib in balance at Tehran summit

Fate of Syria's Idlib in balance at Tehran summit 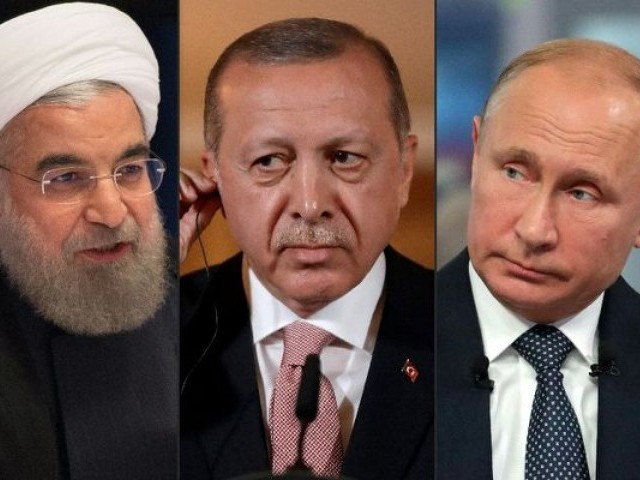 Hundreds of civilians flee to the province as government forces and allies prepare for major confrontation PHOTO: AFP

TEHRAN: The presidents of Iran, Russia and Turkey meet Friday in Tehran for a summit set to decide the future of Idlib province amid fears of a humanitarian disaster in Syria’s last major rebel bastion.

Hundreds of civilians fled the northwestern province Thursday as government forces and their allies readied for what could be the last – and bloodiest – major battle of Syria’s devastating seven-year civil war.

Seized from government forces in 2015, Idlib and adjacent areas form the final major chunk of Syrian territory still under opposition control, home to some three million people – around half of them displaced from other parts of the country, according to the United Nations.

Neighbouring Turkey, which has long backed Syrian rebels, fears the assault could prompt an influx of desperate Syrians attempting to find safety on its territory.

But regime backers Russia and Iran have sworn to wipe out ‘terrorists’ and Syrian President Bashar al-Assad has declared his determination to retake control of the entire country.

Ankara, Moscow and Tehran are also guarantors of the Astana process, a track of negotiations that has eclipsed the UN-led Geneva process and helped Assad re-assert his authority over the country.

Iranian television reported that the three leaders would each have “bilateral meetings” on the sidelines of the main summit.
Just hours later, the UN Security Council will also meet at Washington’s request, also to discuss Idlib.

The Tehran meetings could determine the scale and the timeline of the Idlib offensive, which the UN has warned may displace 800,000 people.

Idlib is dominated by the extremist group Hayat Tahrir al-Sham, led by the former al Qaeda branch in Syria.

Neighbouring Turkey has limited sway over the extremists who control an estimated 60 per cent of the province but it backs militant groups there and has 12 military “observation points” across the province.

Idlib’s population has swelled as the regime chalked up a series of victories in other parts of the country, reaching evacuation deals that saw tens of thousands of people bussed to the northwestern province.

Russian and Iranian support has been key to the regime’s successes.
While Ankara has said it will try to prevent the assault taking place, both Moscow and Tehran confirmed their support for Assad ahead of Friday’s summit.

The Kremlin said the Syrian army was preparing to solve the problem of ‘terrorism’ in the rebel stronghold.

“We have killed, we are killing and we will kill terrorists… whether that be in Aleppo, Idlib or other parts of Syria,” said Kremlin spokesperson Maria Zakharova.

Her Iranian counterpart, Bahram Ghassemi, assured Damascus of Iran’s support and willingness to “continue its role as adviser and help” for the Idlib campaign.

Al-Watan, a Syrian daily close to the government, reported on Monday that the army’s operation is likely “to immediately follow the summit”

Tehran has said it wants to help Assad’s forces rid Idlib of rebels with the “least possible loss of human life”, while Moscow said efforts were ongoing to separate “normal fighters from terrorists”.

Russia wants Turkey to use its influence to rein in rebels and the extremists.

On Wednesday, the UN warned of a ‘bloodbath’ in the province, fearing that an offensive will cause a humanitarian catastrophe unprecedented since the beginning of the Syrian conflict, which has left more than 350,000 people dead since 2011.

French Foreign Minister Jean-Yves Le Drian warned Thursday of the risk of humanitarian disaster in Idlib, describing the province as a “ticking time bomb, both in humanitarian and security terms”.