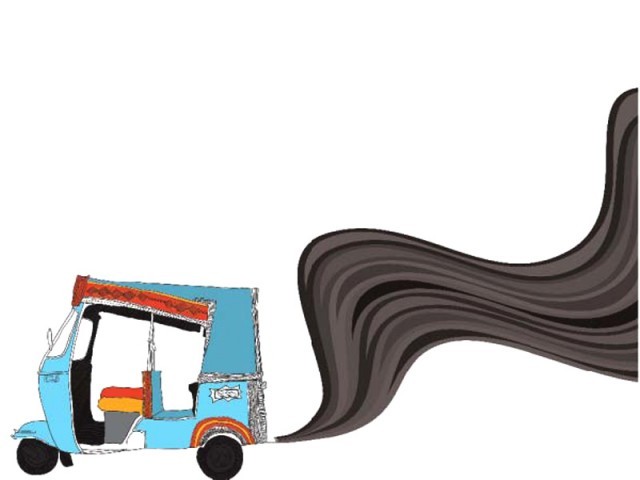 Only three teams to monitor emissions in entire city.

A rise in the number of motorcycle rickshaws, lax vehicle fitness examinations and an insufficient force of emissions inspectors are the major obstacles to controlling air pollution from vehicles in the city, say environment officials.

Only 12 officials, including three inspectors, monitor emissions from vehicles in all of Lahore. They are divided into three teams, which spend some three months in one location checking traffic between 9am and 1pm.

When the inspectors find a violation, a traffic warden hands out a challan to the vehicle owner. Since late April, they have been stationed at Chauburji, Lower Mall and the Garhi Shahu roundabout. Before this, the teams were deployed at Qurtaba Chowk, Thokar Niaz Baig and the Azadi roundabout.

Zahid Younas, the deputy district officer (DDO) for the environment, says that public transport drivers who drive on the same route every day quickly get their vehicles fixed because they don’t want to get fined every day.

“Eventually, the driver start recognising the inspectors because they are there every day,” Younas said. “That’s when we shift to another location.”

But he admitted that the limited number of teams meant a very small proportion of traffic could be actively monitored. And many vehicles continued emitting black smoke despite being fined, he added.

Since two-stroke rickshaws were banned in 2007, Younas said, there has been a rapid rise in the number of motorcycle rickshaws in the city. “They are very easy to make as you just weld a bench to a motorbike and upgrade the engine,” he said.

He said there are currently 35,000 and 37,000 motorcycle rickshaws in Lahore, as well as 35,000 two-stroke rickshaws. These rickshaws emit high levels of unburned hydrocarbons.

An official on the environment teams estimated that rickshaws account for 60 per cent of dangerous vehicle emissions in the city, adding that it was difficult to stop them. “If we take action against rickshaws, the unions block the roads in protest,” he said.

Younas complained that motor vehicle examiners, whose job is to ensure that public transport running in the city meet minimum fitness, safety and emissions criteria, did not do their job properly. He said many vehicles were issued fitness certificates without proper testing.

Seeking on the condition of anonymity, an inspector with the motor vehicle examiners said only buses were checked for fitness. He said there was only one vehicle examination centre in Lahore, at Badami Bagh, and they did not have the capacity to properly inspect every vehicle.

From January 1, 2010, to May 25, 2011, the air pollution monitoring teams fined the owners of 15,161 vehicles for unfit engines, and drivers of 8,111 vehicles for noise pollution. These included 7,775 two-stroke auto rickshaws and 7,570 motorcycles or motorcycle rickshaws that were fined for both smoke and noise.