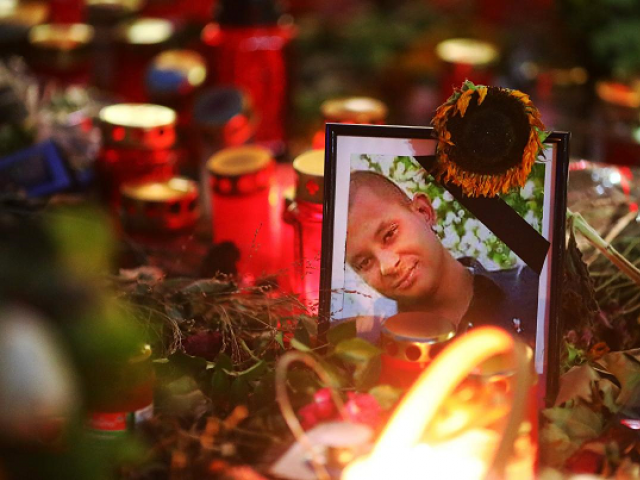 The stabbing victim’s surname has not been disclosed and police have given few details of the killing itself but say the incident began with a verbal altercation. PHOTO:REUTERS

BERLIN: One of two immigrants arrested for the fatal stabbing of a German man could have been deported in mid-2016, a German court said on Friday, news that risks fueling far-right outrage about a case that has already sparked violent xenophobic protests.

The court in Chemnitz, the eastern city where the stabbing took place, said Yousif Ibrahim Abdullah could have been deported two years ago to Bulgaria, where he first applied for asylum, but authorities missed a six-month deadline to do so.

Anti-migrant groups and far-right extremists have seized on the case as proof that Chancellor Angela Merkel’s open door policy – under which around 1 million asylum seekers entered Germany in 2015 – let in criminals and terrorists.

The anti-immigration Alternative for Germany (AfD) party and the PEGIDA group plan to march again on Saturday in Chemnitz to “mourn Daniel H. and the others killed by Germany’s forced multiculturalization.”

Hundreds of anti-immigration protesters chanting “Resistance!” demonstrated in Chemnitz on Thursday after a series of violent confrontations that followed the killing of the 35-year old German carpenter.

The stabbing victim’s surname has not been disclosed and police have given few details of the killing itself but say the incident began with a verbal altercation.

Protests on Sunday, hours after the killing, turned violent, with crowds of skinheads filmed chasing foreign-looking people through the streets, and bigger protests were held on Monday.

The German Soccer League (DLF) said a second division soccer match between Dynamo Dresden and Hamburger SV on Saturday had been canceled as the police in Saxony, the province that includes Chemnitz, needed all available personnel for protests.

Many Germans have recoiled at anti-migrant violence since the stabbing. The chief federal prosecutor’s office said it had begun a preliminary probe into whether the rapid mobilization of far-right protesters revealed an organized network.

Michael Kretschmer, Saxony premier, said the failure to deport the stabbing suspect, a 21-year-old Iraqi man with multiple previous convictions, was the responsibility of federal authorities. A 22-year-old Syrian suspect was also arrested.

Family Minister Franziska Giffey laid flowers at the scene of the crime in Chemnitz on Friday, the first member of Merkel’s cabinet to visit.

Giffey said the unrest that followed the stabbing was a wake-up call for the federal government to pay attention to public concerns, and suggested an additional cabinet minister or Merkel herself could visit the city at a later point.

Chemnitz mayor Barbara Ludwig said she hoped the situation would result in long overdue attention to the disparities that still divide Germans in the former East and West. “In that way, something good can come from this very difficult situation.”

A new poll for broadcaster ZDF showed 76 per cent of Germans see far-right extremists as posing a danger to German democracy.
But Alexander Gauland, leader of the far-right AfD, which is now the biggest opposition party in parliament, said it was ‘legitimate’ for Germans to feel angry after the stabbing.

He criticized politicians and the media for branding all the protesters as far-right extremists and said his party did not condone Hitler salutes, some of which were reported at Monday’s rally.

Gauland said AfD chapters in Saxony and two other states would convene a march on Saturday to mourn the stabbing victim, and criticized state police for losing control of Monday’s protests, which drew some 6,000 supporters.

Kretschmer told German broadcaster ARD on Friday that the AfD – which won nearly 13 percent of the vote in last year’s federal election – bore some blame for the riots after it “used very warlike language to call people to take to the streets”.