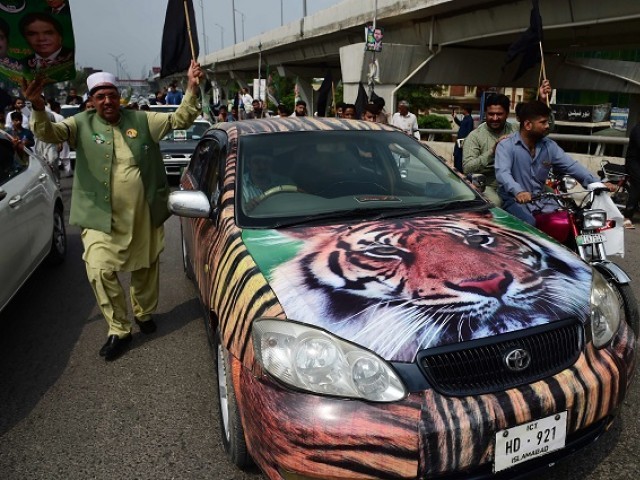 A Pakistan Muslim League-Noon rally in Rawalpindi on July 22, 2018. PHOTO:AFP

LAHORE .: Pakistan Muslim League-Nawaz (PML-N) finalised most of its candidates for by-elections in eight constituencies in Punjab and one in Islamabad.

According to PML-N, the final approval of the names was given by Nawaz Sharif on Thursday during a meeting with PML-N president Shehbaz Sharif and his son, Hamza Sharif, at Adiala Jail.

Former prime minister Shahid Khaqan Abbassi would contest from NA-124, which was vacated by Hamza Shehbaz who retained his provincial assembly seat.

This constituency is considered a PML-N stronghold and Abbasi is assured an easy win.

Former railways minister Khawaja Saad Rafique will contest by-election from NA-131. The seat had been previously lost to PTI chief Imran Khan by a thin margin.

This is one of the four seats vacated by Prime Minister Imran Khan, retaining his hometown seat of NA-95, Mianwali.

Another seat vacated by Imran Khan is NA-53, Islamabad which is being contested by former CAD minister Tariq Fazal Chaudary of PML-N.

In Punjab, Sohail Khan is said to be PML-N’s candidate for NA-56 (Attock-II).

On NA-60 (Rawalpindi-IV), where elections were delayed because of Hanif Abbassi’s conviction in a drugs case, Sajid Khan is party’s likely candidate.

The party’s spokesperson Marriyum Aurangzeb confirmed these candidates as the party’s pick for by-elections.

Surprisingly, former interior minister Ahsan Iqbal had said that party tickets will be issued in the parliamentary board’s meeting.

He said that no party’s ticket had so far been issued.

According to him, all decisions in this regard were subject to parliamentary board’s approval.

When asked how did Saad Raffique claim to have the party’s approval for ticket, he said that he was the obvious choice for NA-131.

Earlier in the day, Saad Rafique addressed PML-N workers and announced that the party had asked him to contest elections from NA-131.

He said that even Nawaz Sharif wanted him to contest the by-elections.

He said that rigging would not be acceptable at all this time around.

Advising Imran Khan and his cohorts not to make a mockery of themselves, he said that their decisions to elevate Usman Buzdar as the CM Punjab and Imran Ismail as the governor of Sindh were questionable.