Tough times ahead for Zardari, Musharraf

Tough times ahead for Zardari, Musharraf 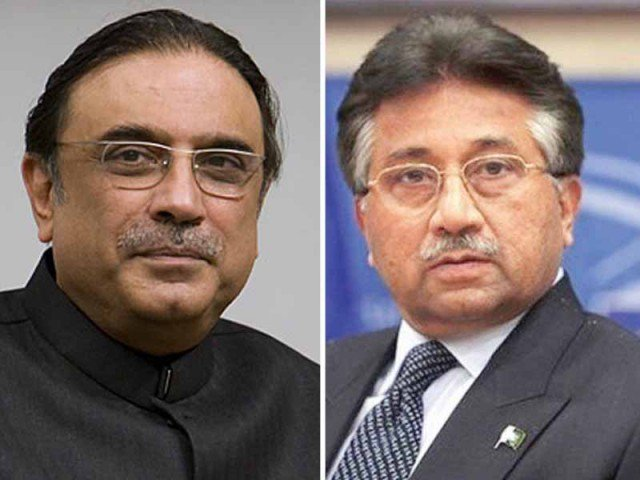 The apex court also sought details of their bank accounts, which they owned since 2007 along with an affidavit. PHOTO:FILE

ISLAMABAD: After Nawaz Sharif, it appears the Supreme Court is set to give former presidents — Asif Ali Zardari and Pervez Musharraf — a tough time, as a three-judge bench, headed by Chief Justice of Pakistan Mian Saqib Nisar, sought details of their local and foreign properties.

The apex court also sought details of their bank accounts, which they owned since 2007 along with an affidavit.

The bench also asked former attorney-general Malik Qayyum to furnish the same details on affidavit for the same period (2007-2018).

It also directed Asif Ali Zardari, Pervez Musharraf and Malik Abdul Qayyam to file detailed statements of their assets and bank accounts operated by them and their spouses over the past 10 years.

‘Not a coward’ Musharraf changed plans for return after SC order

For the first time, the apex court also sought details of properties owned by Benazir Bhutto, Bilawal Bhutto-Zardari, Asifa and Bakhtawar since 2007.

The court also asked Zardari to share details of properties that might have been owned through arrangement of a trust.

Legal experts said that if Zardari’s assets did not match with details mentioned in his nomination papers, he might face a lifetime disqualification under Article 62(1)(f) of the Constitution.

Similarly, he would also face difficulty if the apex court sought the source of funds to purchase those properties.

“You have been provided laundry for getting clearance,” the chief justice asked Zardari’s counsel Farooq H Naek, who appeared visibly upset when the bench called for details of properties owned by his clients since 2007.

He said that Zardari’s only fault was that he was a politician. He wondered how much longer he would have to face trials on the basis of such frivolous petitions.

When Naek wondered why the bench was seeking more details, the chief justice replied: “You [Zardari] are a public office holder. We want to gauge your honesty under Article 62(1)(f) of the Constitution”

Naek replied that Zardari was acquitted after remaining in prison for nine years. “Even now, NAB’s appeals are pending in the Islamabad High Court.”

“Who will return his nine years during which he was in jail and not allowed to meet his wife and children?” Zardari’s attorney asked the bench.

Expressing concern, he said that if he submitted the details, an inquiry might be launched about his assets.

Zardari’s trial, he said, had been continuing since 1997.

“Even his trial was conducted in Attock jail. Who will compensate his nine years of imprisonment?” he again asked.

In response, the chief justice said that if he satisfied the court, compensation might not be given in financial terms, but he would gain a certificate by the apex court.

“This will be a complete vindication.”

Justice Ijazul Ahsan remarked: “If you are clear, you will get a clear vindication.”

In a lighter vein, Naek said: “Once bitten, twice shy.”

He reiterated that Zardari had been acquitted in the assets case and the high court should be allowed to adjudicate the matter.

However, Justice Umar Ata Bandial remarked that Zardari had been acquitted because of lack of evidence.

“Your (Zardari’s) affidavit is incomplete. It is creating doubts”, he adds.

He said that he should furnish details of all properties, even those which were owned by any trust, adding that such trusts also needed to be examined as it has been witnessed in one case (Jahangir Tareen’s disqualification), in which the respondent had claimed that he was not a trustee but it was found that he was the actual beneficial owner of that trust.

The chief justice remarked that Musharraf could not have purchased the apartment he owned in Dubai even if all his salaries were combined.

The CJP asked the ex-COAS’s counsel to explain how he could have his client purchased such an expensive flat. He also inquired if Musharraf had declared these assets in his tax returns.

Akhtar Shah said that he would ask his client before confirming anything.

The court also called upon Musharraf to appear in court in person and explain about his assets. Akhtar Shah said that Musharraf delivered lectures across the world after he left Pakistan.

The chief justice said that he was surprised that someone could earn such money just through delivering lectures.

“After retirement, I will also do the same,” the chief justice said.

The chief justice said: “We also need details of his [Musharraf] income and immoveable and moveable assets and bank accounts in Pakistan.”

The court also referred the matter of Malik Qayyum who, as an LHC judge, had convicted Benazir Bhutto on instructions of the Sharifs.

The hearing was later adjourned for three weeks.

The court initiated proceedings over a petition filed by Feroze Shah Gilani against the National Reconciliation Order (NRO).