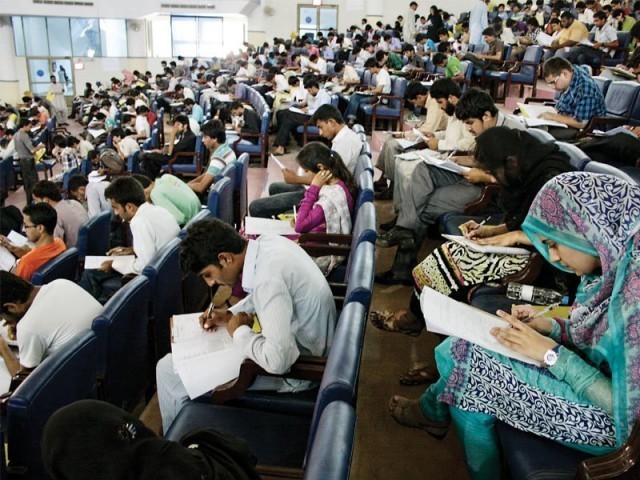 The testing service has lately become a booming business, the reason why several new testing bodies have sprung in the market. But they have also come along with some real troubles PHOTO:FILE

ISLAMABAD: Before the Pakistan Tehreek-e-Insaf government starts recruitments in different departments it must mind that they need to opt for a credible and reliable testing service given ‘shady’ record of the existing testing services in the country.

Currently, there are about five testing services in the country of which National Testing Service (NTS) is the major one having access in larger areas of the country and one of the oldest, working since 2003.

NTS claims to be a non-profit organisation and registered with the Securities and Exchange Commission of Pakistan (SECP). Established in 2002 as a project of the Comsats Institute for Information Technology (CIIT), it later became a full-fledged testing service.

The testing service has lately become a booming business, the reason why several new testing bodies have sprung in the market. But they have also come along with some real troubles. For instance, in 2017 a senator inquired in the Senate as to how many of the existing testing bodies have paid taxes in three years and the reply was a surprise for many.

The then finance minister Ishaq Dar replied that NTS, BTS, PTS and STS have not paid a single penny in taxes in 2014, 2015 and 2016, while the UTS paid Rs873 in tax for 2015 only. Later, NTS claimed it had paid more taxes than any other testing service.

Amongst these services giants, NTS has been in the news for all the wrong reasons in the past three years. Allegations of corruption, irregularities, leakage of papers and other issues dogged the service.
As a result, many clients left and sought help of other testing services or started conducting their own tests to be more transparent and credible.

The first jolt the NTS received was in 2014, when the Lahore High Court directed the Higher Education Commission (HEC) to start a new testing service, in a case of a student and directed HEC to have its own testing body. In that case, it was mandatory for universities to enrol students who have appeared in NTS tests.

The HEC, in the court, had failed to come up with any official notification or memo that would have allowed the commission to let the NTS administer various tests. The NTS has been conducting tests for admission to universities and various HEC scholarships since 2002 on a verbal order of the then HEC top management.

The HEC started its own testing service ETC in 2017 and has recently decided to shut it down as the new chairperson has wished to.

The NTS later sustained another serious jolt when in 2015 its chief operating officer (CEO) and pro-rector of the CIIT turned out to be a plagiarist in his PhD thesis. The CIIT later removed him from his positions while the university revoked his degree awarded to him in 2006.

This incident had domino effect and the NTS came under the radar for its governance, legal and financial model which was in the news for wrongdoings and irregularities.

The SECP first held the audit in 2014-15 and found massive irregularities. It was rejected by NTS on technical grounds. Later AGPR held another audit that also came up with serious irregularities in payments, operations and other affairs of NTS but the latter did not budge.

The Public Accounts Committee also discussed the issue several times and finally concluded that the Ministry of Science and Technology will hold the fresh audit of the NTS. The secretary of the ministry also agreed that the board of directors of the testing service would be overhauled.

However, till date there has been no such thing about the audit and overhaul of the governing board.

Moreover, several cases of leakage of testing papers were also reported in Sindh and elsewhere. The NTS management changed the staff in those cities but that also dented the credibility of the service.

The NTS is also being run with the additional charge as CEO by CIIT’s Wah Cantt director Brigadier (retired) Tayyab Ikram while claiming to be independent and autonomous the NTS still has many directors who are from the CIIT.

The confusion has reached to the extent that even the government was unable to answer a question about NTS in the Senate. So it all boils down to the fact that it is right time the government considers the previous government’s decision of having an independent testing service.