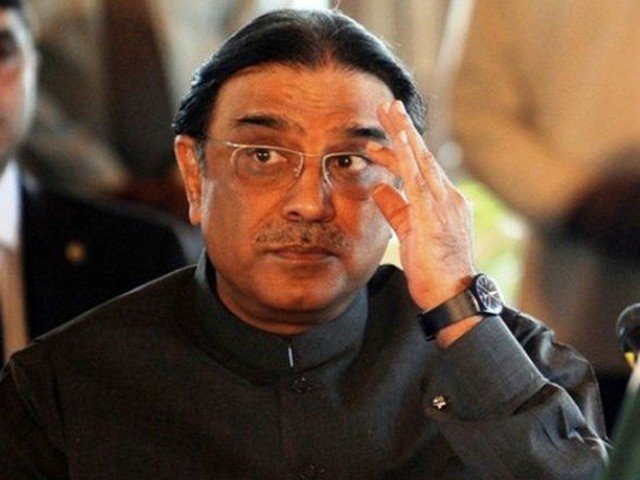 ISLAMABAD: The Federal Investigation Agency (FIA) has proposed forming a high powered joint investigation team (JIT) with representatives of seven departments including the Inter-Services Intelligence  and the Military Intelligence to probe into the alleged money laundering of Rs35 billion.

In its report submitted to the Supreme Court on Tuesday, the FIA said the PPP Co-chairman Asif Ali Zardari, whose company appears to be linked with the alleged transfer of huge sums through fake bank accounts, has requested for a questionnaire containing allegations and sought time for answering them.

Former president Zardari and his sister, Faryal Talpur, appeared before the FIA investigators on Monday in connection with the scandal and were interrogated for 35 minutes.

The report said the other accused and owners of the Omni Group, Anwar Majeed and Abdul Ghani Majeed, were given ample opportunity to produce the evidence in their defence regarding heavy deposit of Rs3,122 million and withdrawal of 4,014 million in 29 suspicious accounts.

“Although both the accused admitted transactions in fake accounts, they failed to produce any evidence in their defence regarding the use of said amounts transacted in the said accounts.” said the report.

It submitted that during the investigation, two more companies of the Omni Group surfaced. “Anoud Gas which has transaction with one of the fake account Umair Associates and Pantinum LPG were disclosed during the interrogation,” it added.

The report revealed that during the probe some reliable information was received that important documentary evidence pertaining to the instant case can be secured from Khoski Sugar Mills Badin but during search it was found that record had been burnt. However, a few samples were seized.

It is also found that payments were made from these accounts to the UK personal / family accounts Anwar Majeed and the purchase of property in UAE/ UK. Transfer of amount in the foreign accounts of KAM Crown and withdrawal of huge cash amounts from fake accounts in the same days created suspicion that capital flew out of Pakistan via illegal route of hawala/hundi, the report said.

It said the UAE government has also been approached through proper channel for providing details of the nature of the business of KAM Crown and its import and export details. Accused Abdul Ghani has admitted links with Haji Haroon for illegal purchase of USD amounting to PKR80-100 million.

It said action is still awaited to freeze the properties owned by Omni Group. Likewise, the tax returns record is yet to provide by the Federal Board of Revenue (FBR).

The Omni Group, which is allegedly involved in Rs35 billion money laundering scam, has strongly opposed formation of a high powered joint investigation agency (JIT) to probe the matter.

Both accused are closed aide of former president and the Pakistan Peoples Party (PPP) Co-chairman Asif Ali Zardari, who along with his sister, Faryal Talpur, appeared before the Federal Investigation Agency (FIA) investigators on Monday in connection with the scam.

They state that any JIT formed by the Supreme Court will also impinge on the rights of the accused under Article 10-A as such formation, as in the Panama Papers case, conveys the impression that some great wrong has been done which can only be righted through the JIT.

“The accused are branded as ‘guilty’ in the public eye simply because a JIT has been formed to investigate the charges against them,” it adds.

It is also submitted that Panamagate JIT was formed because of the perceived reluctance of the National Accountability Bureau (NAB) former DG to investigate the charges against the then sitting prime minister, Nawaz Sharif, and his family.

“There is no such reluctance in the instant case where the FIA has proceeded to arrest the accused even in the absence of a completed investigation. The accused respectfully pray that for the foregoing reasons the proposal to form a court-appointed JIT be dropped,” it adds.

The reply says that as per section 173 CrPC the final investigation report is already overdue. It should have been filed by 20.07.2018 and there is no reason why the FIA should be relieved of its responsibility, and in effect excused for its negligence, by forming a new JIT for investigation of this case.

“As per section 173 CrPC, it is the duty of the Special Court to commence trial on the basis of the interim report already filed before it if the FIA is unable to file a final report. This duty is also the right of the accused in terms of Article 10A of the Constitution”

It is stated that the FIA is also the investigation agency in term of section 2(j) of the Anti-Money Laundering Act 2010 and one of its officers is to be nominated as the investigating officer under section 24 read with section 2(k) of the said Act.

“Bare perusal of the FIR dated 06.07.2018 and the interim report dated 21.07.2018 show that investigation into the offences described under the schedule to the FIA Act 1974 and sections 3/4 of AMLA 2010 is inter-linked and has proceeded simultaneously”

The Omni Group states that the FIA has its own public prosecutors and legal wing/department to assist in the investigation of the FIR dated 06.07.2018 (section 5-A of the FIA Act 1974 refers).

“The FIA has all powers to request the SECP (Securities and Exchange Commission of Pakistan), the SBP (State Bank of Pakistan) and any other government agency either directly or through the Federal Government for such assistance in the investigation as may be required. It is not shown that such assistance was sought but not given,” it added.

The three-judge SC bench, headed by Chief Justice of Pakistan Mian Saqib Nisar,later adjourned hearing of the case till September 5 due to general adjournment of Bahria Town counsel Aitzaz Ahsan. The bench also hinted at holding daily hearings of the case after September 5.

During the hearing, Deputy Attorney General Sohail Mahmood told the apex court of progress in the case. “Despite issuing of non-bailable warrants, 10 accused remain absconding,” he said. “Meanwhile, Zardari and Talpur are on interim bail.”

The top court rejected a plea by Shahid Hamid seeking access of counsel to Abdul Ghani Majeed – who was arrested by the FIA earlier this month – citing that his client’s life was in danger.

The chief justice observed that the counsel could not be granted access to the accused during the investigation. However, he directed the FIA to ensure Abdul Ghani was provided health facilities.

Panels to suggest how to implement 100-day plan