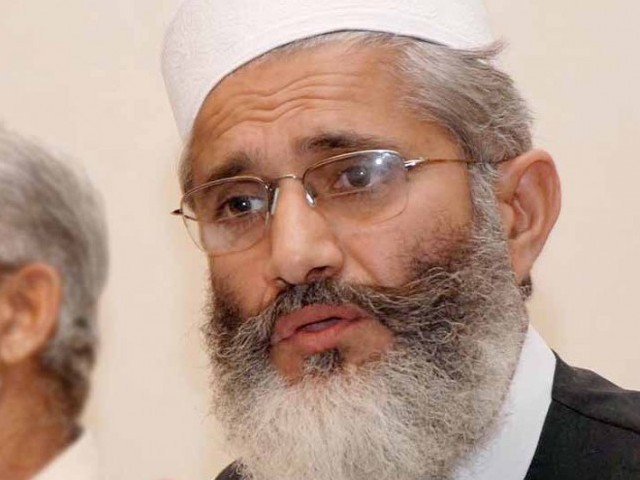 LAHORE: Jamaat-e-Islami (JI) Ameer Sirajul Haq on Sunday said the Islamic movements around the world have started growing stronger despite strong opposition from international establishment because those movements have deep roots in the hearts of people.

Addressing an event marking the 77 years of the party’s founding, Siraj said colonialism is not allowing the Islamic movements to come to power even through democratic process and the toppling of Dr Mursi’s elected government in Egypt and the West’s refusal to accept the victory of Palestine’s Hamas in elections are the irrefutable proof of that.

He said that in spite of the hostility of the international establishment, the JI is against securing power through undemocratic or underground means.

At a time when there was darkness all around, only a handful of noble people had gathered around Syed Abul Ala Maududi and by now, this movement had an impact all over the world, he added.

He said that JI is not prepared to accept the slavery of the world establishment. “We are the slaves of Allah Almighty and His Prophet Peace Be Upon Him (PBUH) and their slavery is our identity and our biggest asset.”

Siraj recalled the past and said when world politics, economy and education system were under the influence of international establishment, JI stuck to the principles of truth.

He highlighted that even during the election campaign, JI invited the people not towards any individual or party, instead it invited towards the system given by Islam.

We have lost elections but not faith, he said adding that most of the people entered politics to make money but JI’s politics is aimed at service of the masses and to bring about the Islamic system.

Slamming the competition of profane caricatures in Holland, the JI chief called for an immediate meeting of the Organisation of Islamic Cooperation to devise a united mechanism to stop such satanic pursuits.

Siraj said Muslims could not tolerate desecration of the Holy Prophet (PBUH), adding that summoning the Dutch ambassador and lodging protest on this was not enough.

On the occasion party Secretary General Liaqat Baloch said Syed Abul Ala Maududi had founded the JI in 1941 with the objective of establishing the supremacy of the Islamic ideology and the enforcement of the system of life given by the Holy Quran and the Sunnah.

He said the JI had continued its struggle in this direction during the last 77 years.

The solution to all problems being faced by the Muslim Ummah lies in the unity of the Ummah and the supremacy of deen.

Speaking to the media, he said the opposition would protect the constitution and the democratic system inside and outside parliament. JI deputy chief Dr Farid Ahmed Piracha, Ahmed Bilal Mehboob and Zikrullah Mujahid, also spoke on the occasion.